September’s kohl-rimmed eyes at cabaret,
her turtleneck in black, the color wrong.
But will she listen? No, this is her song,
the little room now falling, flows away.

But what if a girlie calendar is designed with a lesbian gaze in mind? That sort of subversion is what lesbian poet Mary Meriam has in mind with the title of her poetry collection, Girlie Calendar, and for the Ms. Blog she is excerpting from the book a poem-of-the-month (she began in October and continued in November, December, January, February, March, April May, June, July and August). Meriam is also selecting accompanying artwork for each month from both historical and contemporary lesbian-related images.

Thanks to Ms. senior editor Michele Kort (in memoriam) for writing the above introduction to my Ms. girlie calendar series. Many thanks to all the artists, writers, representatives and readers who participated in my project. And so we reach the last month. It’s been a wild ride searching everywhere for great and beautiful paintings of female nudes by lesbian artists. Mostly I found them, but a few are more clothed than nude, and one is a photograph (by the great Zanele Muholi). One thing’s for sure: Every single artwork in my calendar was created by a lesbian and gives us a new vision of the lesbian gaze.

Ms. September is “The Breeze,” by Anna Elizabeth Klumpke (1856–1942). This painting is curiously missing from Wikipedia’s list of Klumpke’s most notable paintings. But it’s a warm, sensual work of art, and convincingly captures the artist’s love for women.

Klumpke is most well-known for her portrait of her lover, the renowned French painter Rosa Bonheur (1822-1899). In Klumpke’s painting, Bonheur is posed at her easel, which holds a suggestion of her most celebrated painting, “The Horse Fair.” Bonheur is wearing her Grand Cross of the Legion of Honor pin, the first woman to receive this distinguished award. Indeed, Klumpke portrays Bonheur as distinguished, in command of her own space, authoritative, successful. Her clothing is mannish, and in fact, she obtained a license from the French government to wear pants. As in portraits of Gertrude Stein, her legs are firmly and comfortably planted exactly where she wants them.

Lesbian viewers may note with interest an identical palette in “Portrait of Rosa Bonheur” and “The Breeze.” There are shades of gold, gray and white in both Bonheur’s hair and the Breeze’s gown, while the deep browns of Bonheur’s clothes are echoed in the branches and leaves of the tree. The paper in Bonheur’s hand also reflects the Breeze’s gown. One could imagine that Bonheur is gazing at the woman in “The Breeze,” and it wouldn’t be hard to imagine the woman is Klumpke, seducing Bonheur and being seduced by Bonheur.

In 1912, Edward F. O’Day interviewed Klumpke for San Francisco’s “Towntalk.” He wrote, “She has a sweet smile which illuminates a face that bespeaks strong character in every feature. She likes to talk of art, but she loves to talk of Rosa Bonheur, and when the name of the great artist who was her friend is on her lips her face is radiant.”

I highly recommend reading Ray Anne Lockard’s entries in the glbtq Encyclopedia for more details about Bonheur and Klumpke. Their stories merged poignantly in the last year of Bonheur’s life, when they met, fell in love and lived together until Bonheur’s death. Klumpke not only painted Bonheur’s portrait but after her death, became Bonheur’s champion and biographer. Lockard concludes her entry on Bonheur:

Despite Bonheur’s popularity, her work was not universally acclaimed by contemporary critics. This was, no doubt, due, at least in part, to her lifestyle and her feminism. Quite apart from the considerable quality of her work, Bonheur remains important as an extraordinarily successful artist who rejected the patriarchal model of life and lived with the women she loved.

Fabulously featured in The New York Times on August 5, the Guerrilla Girls have been asking since 1989, “Do women have to be naked to get into the Metropolitan Museum of Art in New York?” They posed the question again in 2012, and found that “Less than 4 percent of the artists in the Modern Art sections are women, but 76 percent of the nudes are female.” The percentages have barely changed since 1989.

Mary Meriam advocates for the right of women to love each other in their poetry and art, and strives to give their work a place at the table, even if it’s only a table of her own creation. She writes about and publishes such work in the journal she founded, Lavender Review, at the press she cofounded, Headmistress Press, and at Ms. magazine, The Critical Flame and The Gay & Lesbian Review. Her poetry collections, The Countess of Flatbroke, The Poet’s Zodiac, The Lillian Trilogy and Lady of the Moon, honor a cosmos of strong, creative women. 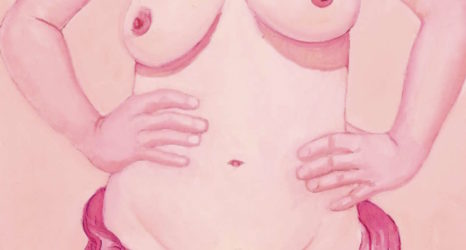 Subverting the “Girlie” Calendar: May