We Can Avoid War with North Korea—If We Listen to Women Peacemakers - Ms. Magazine
Skip to content

The U.S. and North Korea have been at war for 67 years. Between 1950 and 1953, the Korean War killed over two million Koreans, 36,500 American troops and hundreds of thousands more from other countries on both sides. Since then, a united Korea for well over a thousand years has given way to a stark division. Hundreds of thousands of family members physically torn apart by war and outside aggressors know that with each passing day, hope fades that they will reunite.

We don’t talk about peace, reconciliation and reunification in these ways when we talk about the international crisis surrounding the Korean peninsula. It’s easy to see why. North Korea is an odd, isolated nation with a devastating human rights record; South Korea is a flourishing democracy. American politicians and the foreign policy establishment see two vastly different Koreas, with little bridging the divide.

But now, conventional thinking isn’t just continuing the status quo—it’s putting us on a path to renewed war. If we want to truly achieve peace, we must listen to the voices of those who have witnessed the human costs of war on the Korean Peninsula. And, on all sides of the negotiating table, women must be heard.

The U.S./Canada Summit on Security and Stability on the Korean Peninsula in Vancouver last week included the countries that sent troops to fight in the Korean War. I was part of a delegation of women there to demand a seat at the negotiating table in order to influence the official policy statements coming out of the meeting. Our reason was simple: when women influence the peacemaking process, studies show that agreements are almost always reached, are more likely to be implemented and are likely to last longer. In addition, war and violence disproportionately impact women and girls worldwide. When women lead the peace process, they bring a commitment to avoid violence rooted in their own experience of its impacts.

Research finds that women are more likely to advocate for more inclusive and representative solutions, often because they understand the community on whose behalf they represent. Many of the Foreign Ministers represented in Vancouver had never been to North Korea. By contrast, many of the participants in our group of 16 —including women from South Korea, Canada, Japan, Guam, Sweden and the U.S.—had been to North Korea, and some had lived there extensively. Together, we could represent a human perspective on the ongoing costs of war.

Of course, we did not get a seat at the official table—though we did use our time productively in less formal meetings with country representatives and a civil society roundtable. Had we been part of the official talks, we would have asked for a path forward to continue the unexpected, but welcome, pause in hostilities between the U.S. and North Korea and a strong show of support for the inter-Korean dialogue. We would have recommended that the U.S. engage in direct talks with North Korea without pre-conditions, delay joint military exercises with South Korea in exchange for North Korea’s cessation of missile and nuclear weapons testing and facilitate the reunification of Korean-American families with North Korea.

Instead, the talks ended as expected in a world where Donald Trump’s Twitter whims dictate U.S. policy on Korea: The Foreign Ministers promised to enforce and tighten sanctions and adhere to his administration’s pressure campaign on North Korea.

Thus, the two sides remain at an extreme impasse. The Trump administration continues to demand denuclearization as a pre-condition to even talk. North Korea has repeatedly stated it will never give up its nuclear weapons. Trump’s maximum pressure campaign will certainly not change Kim Jung Un’s calculations about his nuclear weapons program, and the North Korean regime will not feel the sanctions, but ordinary people will. Further isolating North Korea will only drive it to continue strengthening its nuclear capabilities, heightening the threat.

The Trump administration is acting as though it doesn’t really want to make a deal. Senior officials prefer to dangle the threat of  a preventive attack, and the chances of miscalculation are too high for comfort. If a war starts, the Pentagon estimates that upwards of 25 million people could be at risk—and that’s if the killing is contained (if we can use such a word) to the Korean peninsula.

War is not inevitable. By luck, we may even muddle through and avoid conflict with North Korea while Trump is in office. But it will take a fundamentally different approach to get true peace and security. Many of us, including women peacemakers, are ready to provide solutions, but we need our voices heard by those making decisions. So far, they’re not listening.

Erica Fein is the advocacy director at Win Without War, a national a national leader in the fight to promote a more progressive national security strategy.

Why Are Perpetrators’ Motives Given More Importance Than the Lives They Take? 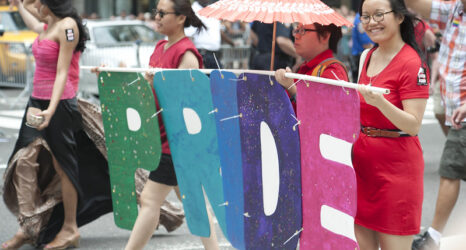 She Is a New Yorker