Men Will Be Men in Russia: The Misogyny of the 2018 World Cup - Ms. Magazine
Skip to content

Just as the World Cup mania kicked off with Mexico’s epic match against Germany, FIFA disrupted macho precedent when they fined Mexico $10,000 for their fan’s use of the “discriminatory and insulting” chant of “puto.” (In English, the word translates to “faggot.”)

Many have rightfully celebrated the fine as a win against bias and bigotry. But as the games head into their final rounds, it would be too naive to say that World Cup soccer is ready to shed it’s machista roots. There’s still one group fans attending the event can target with impunity: the women reporting on and attending the event. 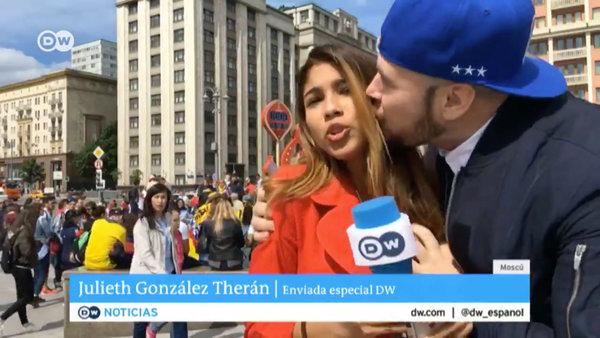 Colombian journalist Julieth González Theran learned this lesson when a man sexually assaulted her as she was reporting live from Saransk, Russia on June 14. She maintained her professional composure and continued doing her job. The man, who had touched her breast and kissed her cheek as she tried to report the news, suffered no formal repercussion, despite the fact that he was easily identifiable and on film. “¡Respeto! We don’t deserve this treatment,” González Theran wrote on Instagram. “We are equally valuable and professionals. I share the joy of fútbol, but we need to identify the limits of affection and harassment.”

González Theran wasn’t the only journalist to endure an online assault. Brazilian reporter Julia Guimarães was on camera in Russia, attempting to report ahead of the Japan vs. Senegal game, when she was suddenly approached by a man who tried to kiss her on the cheek. She dodged the kiss, confronted the man immediately, and stopped him in his place. Assertively, she gave him a stern warning: “Don’t do this. Never do this again, okay? Don’t do this. I do not allow you to do that, never, okay? This is not polite, this is not right. Never do this.”

Average women attending the games were also not immune to attacks. An Argentinian man in his late 40s named  Néstor Penovi asked an adolescent Russian woman to repeat “Quiero chupar pija”—or “I want to suck dick”—on camera. The video got more than 100,000 views on YouTube in a few days. In that case, even the Russian Embassy intervened, asking the man in a formal letter to apologize.

Sports and sexism are nothing new. For more than 25 years, sociologists like Dr. Michael Messner have exposed thee rape culture that associates men with power and women with pleasure. But men who love soccer have taken it to a new level, engaging in a wide variety of openly aggressive behaviors with impunity for decades.

In her 2008 article, “Female Fandom: Identity, Sexism, and Men’s Professional Football,” Dr. Katharine Jones examined how sexist and homophobic language became endemic to to the game, as is illustrated by the controversial “Puto” chant that landed Mexico in trouble. But some might argue that sexual violence against women in World Cup in Russia is not a result of gender inequality but an active factor in creating it.

In the ultra-heated conquistador culture on the ground in Russia, women who are part of the world of soccer —whether they be journalists, spectators, tourists or simply citizens of a hosting country—become second-, or lower, class citizens. Women are reminded constantly that they do not belong. Whether they are tourists or from the local culture, they’re part of the territory dominated and controlled by men, just another fun fringe benefit of the male bonding extravaganza. Echoing the rituals of the fraternities that Dr. Peggy Sanday documented in her thought provoking book Fraternity Gang Rape, originally published in 1990, soccer fans have relied on misogyny to establish this bonding and intimacy with other men in these international tournaments.

“Estábamos en broma, en chiste, con amigos”—meaning “we were playing, joking among friends”—was the response that Néstor Penovi gave to a reporter when he was asked about the reasons he asked the Russian adolescent girl to repeat a vulgar, obscene expression in a language completely foreign to her. In anticipation to the 2018 World Cup, the Argentine Football Association published a manual that included “advice on how to woo Russian women” and later apologized.

Clearly, sexism in the world of sports is both, well-rooted and institutionalized. “How can it be that most men don’t commit these acts—and would never even consider it—and yet sexual assault remains such a pervasive issue?” asked actor-activist Justin Baldoni and leading men and masculinities studies sociologist Dr. Michael Kimmel asked this past April during Sexual Assault Awareness Month. The issue is that in the culture of rape, men still act with impunity, even though they may later express regret.

The Russian man who sexually assaulted González Theran directly apologized to her in a videotaped conversation. Penoví similarly came across as remorseful about his behavior at an interview at the airport after arriving in Argentina. Women on the ground, however, won’t rely on regret and apologies to create a safer culture on the ground at the World Cup or other major soccer events.

Far from victims, González Theran and Guimarães experiences are inspiring others who will continue working hard to promote a life free of violence for them in the world of sports; they are part of a larger feminist community. More than 50 women reporters, their brave colleagues, launched the provoking “let her work” (#DeixaElaTrabalhar) campaign in Brazil earlier this year—and reportedly, it is increasing awareness.

For women around the world who hope to attend their favorite sport free of violence, any indication of real social change will still have to be lived, and fought for, in and outside of the stadium.

Gloria González-López is a professor of sociology at the University of Texas-Austin and a Public Voices Fellow with the Op Ed Project.