In Rage Becomes Her, a must-read new book that is perfect for our times, Soraya Chemaly—writer, activist and director of the Women’s Media Center Speech Project—explores why all of us, women and men alike, are so uncomfortable with women expressing their anger.

We see it every week in the headlines: A woman expresses rage and she gets called hysterical, crazy, unhinged, nasty or a poor leader. (Meanwhile, when a man is angry, he’s more likely to actually gain influence and be rewarded. Some angry men even get elected president.)

In her introduction, Chemaly reflects on this dichotomy, explaining who is allowed to be angry and who isn’t:

In some cultures, anger is a way to vent frustration, but in others it is more for exerting authority. In the United States, anger in white men is often portrayed as justifiable and patriotic, but in black men, as criminality; and in black women, as threat. In the Western world, which this book focuses on, anger in women has been widely associated with “madness.”

Reading Chemaly’s book is a breath of fresh air for those of us who have spent years, even lifetimes, suppressing our rage in order to make the right impression. She unpacks scientific studies, conducts in-depth interviews and shares her own personal experiences to analyze why society views angry women as dangerous—and goes further to explain why all this anger suppression is bad for women, and for society at-large. 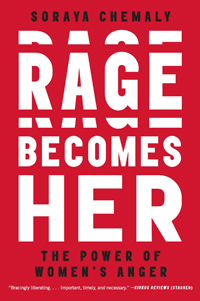 Chemaly also argues that women’s anger is one of the most powerful tools for creating lasting change, positing that anger about inequalities that exist in the world can be transformative, and that when rightful anger, expressed collectively, is channeled into action—as we’ve seen with the #MeToo and #TimesUp movements and with the VDAY movement to end violence against women—it is a disruptive force.

“It is not just a coincidence that we are at an uncomfortable strategic inflection point for the rights of girls and women just as we face grave threats to democratic values and the health of the planet,” Chemaly writes. “One cannot be separated from the other. This is an era of angry women and women willing to make noise.”

I know this from my own life. I was brought up to be a “good girl.” In the South—and likely elsewhere!—that meant smiling frequently, never raising your voice and never complaining. Polite and politic and quiet.

I’ll share a cautionary tale about suppressed anger from a former “good girl.” I was teaching freshman and sophomore English at the University of Georgia while working on my doctorate. At the end of the first year while preparing for my salary review, I talked to a colleague who had the exact same schedule of teaching as I did and the exact same level of education and experience.

He told me his salary. It was a lot higher than mine. Armed with this information, I went into my meeting with head of the English department and—very nicely, in a polite and measured (politic) tone—asked for a raise, the amount of which would make my salary equal to that of my colleague.

He smiled, noting that while I had positive reviews from students and colleagues, my request for a raise wasn’t possible. Again, politely, I wondered: why, if my reviews were good and my credentials the same, was my male colleague was paid more? With another condescending smile, he responded: “He has a family to support.”

I remember feeling anger welling up, but instead of demanding fair and equal pay for equal work in a non-polite voice, I smiled through slightly clenched teeth and reminded the dean that I, too, had a family to support: a two-year-old child and a husband still in school.

He sympathized with my burden but held firm: the budget was set, no raise.

Had I been in touch with my anger and been able to express it constructively, firmly demanding fair treatment, I might have walked out with the raise I deserved—or, at the very least, the ruckus my anger would have created might have led to a review of the wage gap then, instead of much later.

There were other instances in those first years where I continued to follow the “good girl” strategy, but when the same differential in pay came up in my second teaching position, I let my anger and indignation show. Without a smile, I suggested that perhaps an organized protest among the other women facing similar wage gaps might be more effective than negotiation.

That time, I got the raise I asked for—and I learned an important lesson that righteous anger rightfully expressed can lead to positive outcomes.

I encourage you to read Chemaly’s informative and inspiring book—a game-changer for these game-changing times which offers women ways to let go of all that childhood and early adult learning that expressions of anger are unladylike and dangerous. Yes, anger can be dangerous—but that’s not necessarily a bad thing. When righteous anger is expressed and acted upon, we can become rightfully dangerous for ourselves and for others.

“This is the real danger of our anger: it makes it clear that we take ourselves seriously,”Chemaly writes. “This is true in our homes and in our public lives. By effectively severing anger from ‘good womanhood,’ we chose to sever girls and women from the emotion that best protects us against danger and injustice.”

So let’s be angry and dangerous—and change the world.

Ms. digital editor Carmen Rios sat down with Soraya Chemaly to talk about Rage Becomes Her and how feminists everywhere can better channel their anger into social change during this political moment. Follow Ms. on Facebook to be notified the next time we host a LIVE Q&A!

There is no better time for women everywhere to tap into their rage and use it to fuel the fight for equality—and Soraya Chemaly's new book, "#RageBecomesHer," is the roadmap to making it happen. Ms. digital editor Carmen Rios sat down with Chemaly to talk through the news cycle, work through her own rage and work to build a roadmap toward transformative anger.