In the two weeks since Dr. Christine Blasey Ford came forward with allegations that Supreme Court nominee Brett Kavanaugh sexually assaulted her when they were both in high school, she has been faced with an onslaught of vicious attacks. Blasey Ford and her family were forced to relocate after they received death threats; her online accounts have been hacked and entities impersonating her have sent messages falsely claiming she is recanting her story.

Blasey Ford was the first woman to accuse Kavanaugh of sexual assault, but today she testified before the Senate Judiciary Committee amid a mounting number of such allegations. Four women have now come forward to allege that Kavanaugh played a part in their own experiences of sexual violence.

In solidarity with all of the women coming forward and survivors across the country, countless woman have risen up to support Blasey Ford and demand that Senators reject Kavanaugh’s nomination.

Last week, the hashtag #DearProfessorFord went viral after celebrities and feminist leaders together released a video under the same name sending her messages of support. Later that week, survivors took to Twitter to tell their own stories with the hashtag #WhyIDidntReport—making the case that Blasey Ford, who stayed silent about an attempt to rape her that she alleges involved Kavanaugh and his friend Mark Judge, was credible even if she hadn’t come forward sooner. Offline, women across the country even took to the streets, protesting outside the entryways to Senate offices and walking out of their workplaces clad in all black in a national show of solidarity with Blasey Ford, during which the hashtag #BelieveSurvivors trended on Twitter to echo their sentiments.

As Blasey Ford prepared to testify today, that show of support only amped up.

Yesterday, 1,600 men took out a full page in the New York Times to stand behind Blasey Ford. Their statement of support pays homage to one printed 27 years ago, during Anita Hill’s own act of defiant truth-telling during now-Justice Clarence Thomas’ confirmation hearings. In 1991, as she prepared to testify before the same committee, 1,600 Black women took out a full-page ad to honor her courage.

“We believe Anita Hill,” the contemporary advertisement reads in large type. “We also believe Christine Blasey Ford.” The ad, which was written and purchased by the Phenomenal Women Action Campaign, called on men to support Ford and her calls for an investigation and a fair hearing.

In 1991, 1,600 African-American women took out a full-page ad in the @nytimes to show support for Anita Hill.

In today's NYT, 1600 male allies, in a crowdfunded effort, place a full-page ad in support of Anita Hill and Christine Blasey Ford.https://t.co/EA6ojVD8mP pic.twitter.com/Z32SoTBiih

Dr. Daniel Grossman, an abortion provider and director of Advancing New Standards in Reproductive Health (ANSIRH), knows well what Kavanaugh’s nomination to the Court would mean for his patients. In a tweet, Dr. Grossman says, “I am one of the 1600 men who signed my name to the New York Times ad,” Grossman explained on Twitter. “I still believe Anita Hill. I believe Dr. Christine Blasey Ford. I believe Deborah Ramirez. I believe Julie Swetnick. I believe my patients. I #BelieveSurvivors.”

Today’s Washington Post featured another full-page show of support for Blasey Ford. In an advertisement sponsored by the organization Equality Now, in coalition with 80 other human rights groups including the Feminist Majority Foundation, publisher of Ms., feminist leaders shined a light on the ways in which the credibility of sexual assault survivors is often called into question when they come forward—something Blasey Ford knows all too well.

“It takes great courage for survivors of sexual assault to come forward,” the main text in the advertisement reads. “As organizations working for women’s and girls’ rights in the U.S. and globally, we know how difficult it is for victims of sexual assault to come forward given that they are often shamed and blamed by society and sometimes by the legal system itself.”

The groups go on the declare that they are concerned with how Blasey Ford has been treated, stressing that the way the Senate handles the allegations against Kavanaugh will send a message to survivors across the country that they are not believed.

“There can never be equality in a culture that normalizes or trivializes sexual assault and sexual harassment,” the advertisement copy reads. “This is not a partisan issue. We all have a responsibility not to silence survivors, to guarantee that laws and legal systems are based on equality and that victims have access to justice.” 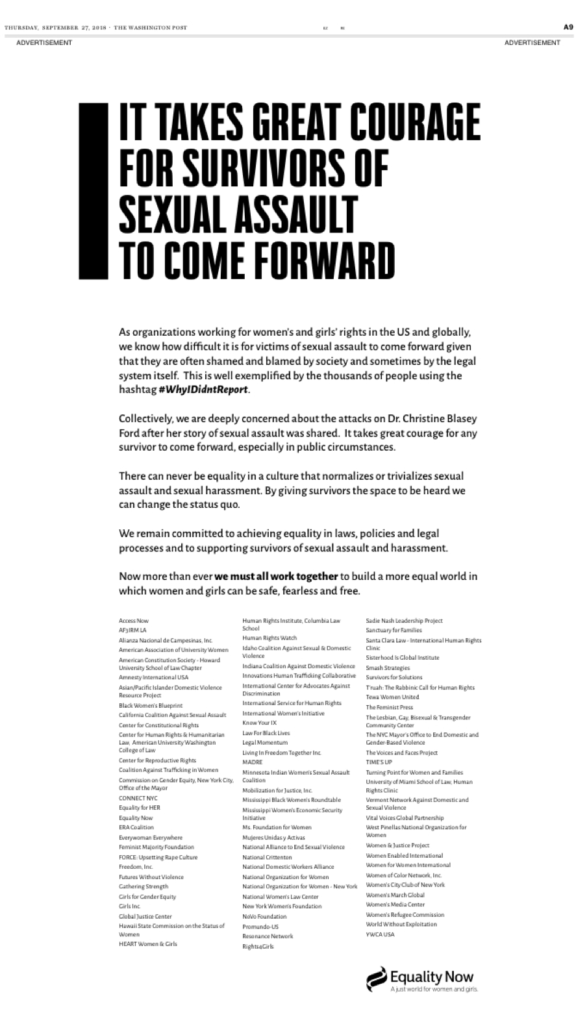 “We all have to work together to ensure those who have experience sexual assault and harassment are supported, protected and given access to fair legal process,”Shelby Quast, Equality Now’s Americas Director, said in a statement about the joint effort. “Never should they be subjected to further attack, irrespective of whether or not the perpetrator is a public figure or in a position of power.”

These public shows of support for Blasey Ford are well-deserved, and they come at a pivotal time. Today, Blasey Ford will speak her truth in front of the entire country—and brace for the inevitable political and personal attacks that will follow. Now more than ever, solidarity will serve to assure her that her courage is recognized and respected—and that she is not alone.