A large crowd gathered in front of Los Angeles City Hall Friday as part of a nationwide day of action that followed in the wake of a Senate Judiciary Committee vote to advance the nomination of Brett Kavanaugh, who is facing mounting allegations of sexual assault and sexual misconduct, to the Supreme Court.

When the demonstration was organized, a floor vote on Kavanaugh’s nomination was scheduled to take place just days after heart-wrenching testimony from Dr. Christine Blasey Ford before the committee, who is alleging that he sexually assaulted her in high school. But before it came to a close, an FBI investigation into her accusation, which feminists had been demanding in the weeks since Blasey Ford came forward, was finally authorized by President Donald Trump.

Protesters gathering in solidarity with Blasey Ford and the other women who have come forward since she exclusively told her story to the Washington Post, however, weren’t about to rest on their laurels. Feminists are continuing to demand information on the extent of the investigation after rumors that the White House had directed its focus and limited its scope—and activists are pushing for Kavanaugh to withdraw his nomination entirely.

In Los Angeles, prominent feminist groups declared their support for Blasey Ford, who alleges that Kavanaugh attempted to rape her in high school, when she was just 15; Deborah Ramirez, who told The New Yorker that he aggressively exposed himself to her without her consent while they were both in college; and Julie Swetnick, who declared in sworn testimony that Kavanaugh was involved in a routine practice of gang-rape at high school parties. They also urged the protestors gathered in the city’s Downtown district to remain engaged in November and make their voices heard at the ballot box—and made space for local survivors to share their own stories.

Times Up Entertainment co-hosted the protest; Nithya Raman, the Executive Director, spoke first, reminding the crowd of the power of women in the streets and at the polls. “They think that a few senators can silence the voice of Dr. Ford and of all women who have come forward. We will not allow that to happen,” she declared. “Women are watching and listening. When we come together we are undefeatable.”

“Today and every day, one of Raman’s colleagues added in a speech to the crowd, “we will take our power back because they never should have had it in the first place. This is about what side of humanity we will be on. Let’s us give our children an example of the future.”

Monica Ramirez, who earlier this year was honored at the Global Women’s Rights Awards for the Feminist Majority Foundation, publisher of Ms., also spoke at the rally. As the leader of Alianza de Campesinas, the only organization representing farm worker women, Ramirez expanded the conversation happening in Los Angeles and around the world as the #MeToo movement continues to fuel a re-invigorated fight against sexual harassment and assault.

“The eyes of the world are upon us,” Ramirez noted. “What example will we be? What compassion will we show? This is the moment when senators have the opportunity to show their courage and leadership and show how this nation treats, believes, and stands with survivors.”

Ramirez, who was met with loud cheers and whistles, was followed by representatives from another organization representing women who face epidemic levels of sexual exploitation—but too often lack a platform and a voice in the national media.

“This is a moment where we are looking at an issue of our democracy,” representative from the National Domestic Workers Alliance told the crowd. “It is our moment as a nation to say that we will no longer dismiss the voices of women. It is women and everyone in our society that is standing up to take this power back.”

Once the crowd responded to each question with a responding “yes,” Bradshaw laid out her marching orders: “Let’s get to work, folks.” 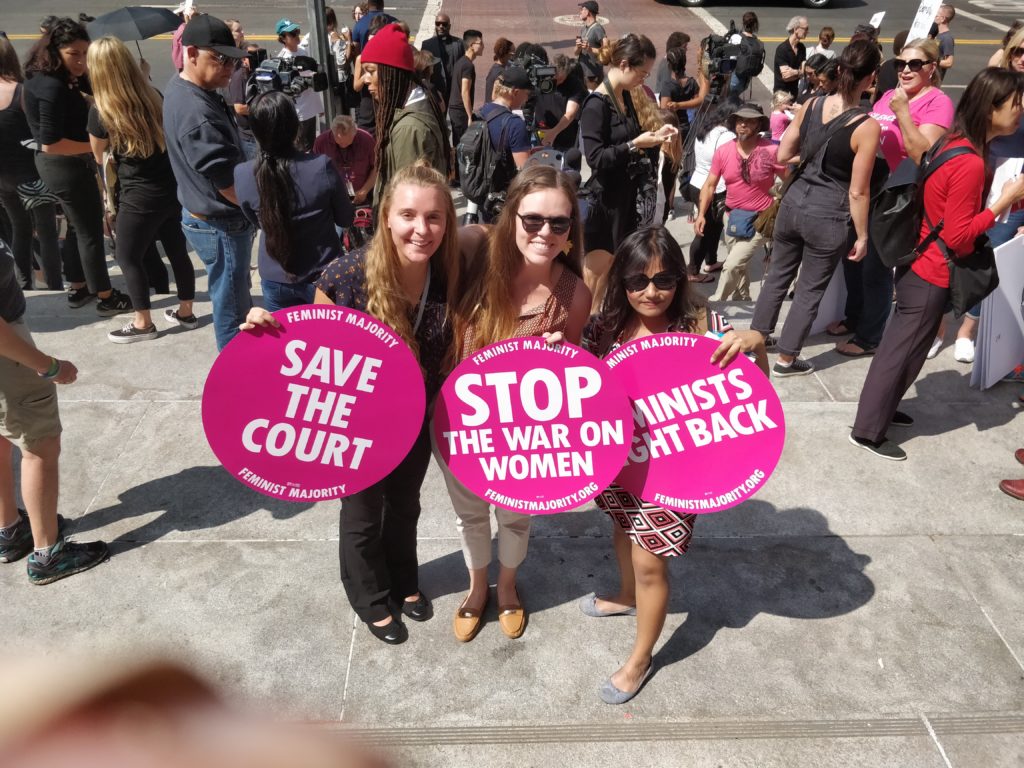 Survivors, some of whom had never shared their stories publicly or privately, then took the mic.

“It’s been six years since I was assaulted,” Rosalind, who identified herself as a 22-year-old feminist, told the crowd in an unwavering tone. “It’s been six years since I’ve spoken about it to anyone. My message to lawmakers and especially to Kavanaugh is that the 10 days you waited was a lifetime to us. We have all been discredited. I will fight like hell to make sure every lawmaker who supports Brett Kavanaugh loses their seat. The reckoning is here!”

Another brave survivor’s story was a testament to the reasons why many women don’t report their assaults. “It’s been almost a year since I was drugged, raped and violently beaten,” she explained. “I reported the incident to my university and the DA never filed charges. We must take justice into our own hands. We must come together. As survivors, we are here to demand justice.”

Building on her declaration, another survivor reminded the crowd that victim-blaming creates a culture of silence—and assured all those gathered there that she believed them. “When I was 16, until the age of 17, I was repeatedly assaulted,” she shared. “When I was in college, I told someone and he said it must have been something I did. I want to remind survivors that it is never because something we are wearing or something we drank.”

“When I was 5 years old, my dad’s best friend thought it would be a good idea to grab me and sexually assault me,” one survivor shared. “When I told someone at the age of 10, no one believed me. This week has been triggering. We must believe Dr. Ford.”

“The sad thing that kept happening,” another survivor shared, “is that everyone said [Kavanaugh] reminds them of their dad, or that guy in high school, that, as soon as he was backed in a corner, he began to cry—as if his tears meant more than hers. And you know what, Mr. Kavanaugh? You’re going to have to cry a lot better than that for anyone to believe you.”

Punam, a 36-year-old woman from Los Angeles, didn’t just make room for her own story—she made room, she told the crowd, for “my rage.” Remarking on the one-week delay granted for Kavanaugh’s eventual vote in order to allot for an investigation, Punam declared: “I don’t think one week is sufficient. They can take three weeks. They can take the entire month.” She told the crowd that her uncle molested her years ago, and that she sees that the culture of sparing sexual predators is continuing.

Punam, like women across the country, refuses to let that happen.

Victoria Sheber is an editorial intern at Ms., a debate instructor at Windward School and a member of the JusticeCorps at the Los Angeles Superior Court. Victoria is currently a senior at UCLA studying American Literature & Culture and History; she is also the President of the American Association of University Women chapter on campus and Assistant Section Editor for Fem Newsmagazine. She loves to read and write about feminist literature.
Miranda Martin is a feminist writer and activist and an editorial intern at Ms. She has written for a variety of publications and been published by The Unedit and Project Consent. Miranda recently graduated from University of Wisconsin La Crosse with a major in Interpersonal Communications and a double minor in Creative Writing and Women, Gender and Sexuality Studies. She loves to travel, read, exercise and daydream about the fall of the patriarchy.
Kohinur Khyum Tithila is a journalist based in Bangladesh. She is a Fulbright scholar and received her second master’s degree in Magazine, Newspaper, & Online Journalism from Syracuse University, first master’s degree in criminology and criminal justice from Dhaka University, and bachelor’s degree in English from East West University. Kohinur writes about LGBTQ and women’s issues, feminism, crime, secularism, social justice and human rights. She is also addicted to anything caffeinated.