Feminists are Pushing for Pelosi as Speaker in the Wake of a Pink Wave - Ms. Magazine
Skip to content

During her four years as Speaker of the House, Rep. Nancy Pelosi made history as the most effective lawmaker to ever hold the post. Now that the Democrats have taken back control over the house, feminists are rallying to get the gavel back in Pelosi’s hands.

“At a time like this, we need an experienced Speaker of the House who has a proven record of passing landmark legislation that improves the lives of the American people,” Feminist Majority president Eleanor Smeal declared in a statement on the heels of the midterm elections. “That leader, without a shadow of a doubt, is Nancy Pelosi.”

EMILY’s List, the National Organization for Women, LPAC, Moms Demand Action, the Women’s Political Committee, the National Women’s Political Caucus, the American Federation of Teachers, Dolores Huerta and Cecile Richards have also endorsed Pelosi for the position in the 116th Congress, in which a record-breaking amount of women will serve in the House.

The “blue wave” at the polls in last week’s midterm elections, which ensured Democratic control of the House come January, emerged from a sea of pink pussyhats. A record number of women ran and won in the 2018 elections, many of whom made history in the process—and women’s votes made their victories possible. Now, in the midst of a misogynist and male-dominated White House and Senate, Pelosi herself has argued that it is critical for her to bring their voices to Washington.

“You cannot have the four leaders of Congress, the president of the United States, these five people, and not have the voice of women,” Pelosi said on Face the Nation. “Especially since women were the majority of the voters, the workers in campaigns, and now part of this glorious victory.”

Pelosi, an ardent feminist, has stated that she would make women’s issues a priority in the position, steering legislation that addresses the wage gap and sexual harassment. As women confront the sexist policies of the Trump administration and Majority Leader Mitch McConnell continues to obstruct progress in the Senate, Pelosi’s feminist leadership could be a powerful tool to preserve the gains of the last century and pave the way for further advances for women nationwide. 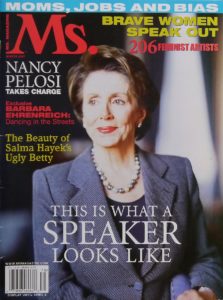 Pelosi also brings a wealth of valuable experience to the table. In addition to being the highest ranking woman in Congressional history, she previously served on the Democratic National Committee, as a state party chair and as finance chair for the Senate Democratic Campaign Committee. In 2001, she became the first woman of any party to score a top job in Congress: Minority Whip. One year later, Ms. named her Woman of the Year as she became the first woman to ever serve as Minority Leader.

Ms. was the only national magazine to feature Pelosi on the cover during her tenure as Speaker from 2006 to 2010—which marked another historic first for women—and named her “The Most Effective Speaker Ever.”

“She is a selfless feminist dedicated to equality and a brilliant strategist who works tirelessly to get the job done,” Smeal added in her statement. “Nancy Pelosi is a role model who knows every issue from A to Z, and always stands for the people. She has our unequivocal support to serve as the next Speaker of the U.S. House of Representatives.”

About Carmen Rios and Miranda Martin

Carmen Rios is a self-proclaimed feminist superstar and the former digital editor at Ms. Her writing on queerness, gender, race and class has been published in print and online by outlets including BuzzFeed, Bitch, Bust, CityLab, DAME, ElixHER, Feministing, Feminist Formations, GirlBoss, GrokNation, MEL, Mic, the National Women’s History Museum, SIGNS and the Women’s Media Center; and she is a co-founder of Webby-nominated Argot Magazine. @carmenriosss|carmenfuckingrios.com
Miranda Martin is a feminist writer and activist and an editorial intern at Ms. She has written for a variety of publications and been published by The Unedit and Project Consent. Miranda recently graduated from University of Wisconsin La Crosse with a major in Interpersonal Communications and a double minor in Creative Writing and Women, Gender and Sexuality Studies. She loves to travel, read, exercise and daydream about the fall of the patriarchy.