Acting Director of National Intelligence Joseph Maguire appeared before the House Intelligence Committee today as part of the recently-launched impeachment inquiry against President Trump. He spoke to the Committee members about his handling of an explosive whistleblower report that alleges the President asked the Ukranian president to dig up information on potential Democratic presidential nominee Joe Biden.

The three feminists on the Committee—Reps. Terri Sewell, Val Demings and Jackie Speier—held him accountable for what they perceived as failures in his handling of the complaint. Much like the push to open the impeachment inquiry, feminists continue to lead this charge to protect our democracy. Their testimonies are examples of what that kind of leadership looks like.

“You remained silent. I’m not sure why, but I think that adds to the chilling effect.”

“What has happened with this whistleblower episode,” Rep. Terri Sewell asserted in her conversation with Maguire, “will have a chilling effect.” During her questioning, Sewell asked Maguire about whether he gave direction to the whistleblower in question, and whether they were aware that they could come before Congress. She also scolded him for not speaking up to defend them when the President attacked them publicly.

“I just want to say, go on record and be clear, that this will have a chilling effect,” Sewell concluded, having thoroughly investigated whether the Whistleblower Protection Act was upheld by Maguire and his staff, “and that is not what this statute was intended for. It was intended for transparency. It was intended also to give the whistleblower certain protections. And I think the American people deserve that.”

“Why would you go there to ask their advice as to what you should do?”

During her questioning of Maguire, Rep. Jackie Speier—whom the Intelligence Director could not stop calling “Congressman”—criticized him for the actions he took once he was made aware of the whistleblower report—including meeting with the President shortly after.

“Knowing that the whistle-blower appeared to be credible based on the evaluation by the Inspector General, and knowing that effort was undertaken by the White House to cover it up,” she asked, “why would you then, as your first action outside of the intelligent community, go directly to the White House—to the very entity that was being scrutinized and complained about in the complaint?”

“I’ve had an opportunity to investigate numerous other criminal cases—and never once, just for the record, Director Maguire, did I ever go to the suspect or defendant or the principal in those cases to ask them what I should do.”

Rep. Val Demings opened her questioning of Maguire by echoing her colleagues in thinking his handling of the complaint was improper and inappropriate. She then went on to press him on whether he believed that the President’s behavior in the whistleblower’s report amounted to coercion. Spoiler Alert: She’s pretty sure it does.

“This complaint outlines a scheme by the President of the United States,” Demings declared. “We deal in what’s reasonable here,” she told Maguire at the end of her time, “and I believe your Inspector General included that in the report because this whole issue is about Ukraine’s position, relationship with the United States, their dependency on the United States and the President’s efforts to coerce Ukraine into engaging in an illegal and improper investigation.”

You can watch the full video of Maguire’s questioning on CSPAN.

Feminists in the House are Fighting for ERA Ratification 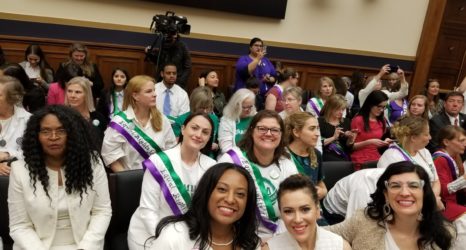 Inside the “Long Overdue” Congressional Hearing on the Equal Rights Amendment