You Are Not Chewed Gum - Ms. Magazine
Skip to content

Since 1981, Congress has spent over $2.2 billion on shame-based, abstinence-only sex education programs—even though data shows that those very programs are failing.

One 2011 study funded by the University of Georgia Research Foundation concluded teens in states that prescribe more abstinence education are actually more likely to become pregnant. The Centers for Disease Control and Prevention (CDC)’s Annual Sexually Transmitted Disease Surveillance Report also found that the combined cases of gonorrhea, chlamydia, and syphilis reached an all-time high in 2018—with half of all new STD cases occurring in young people aged 15 to 24.

Comprehensive sex education curriculums could be the solution for rising STI and teen pregnancy rates, yet the Trump administration has chosen instead to employ strategies to police young women’s bodies.

Last April, the Department of Health and Human Services (HHS) announced plans to restructure Title X family planning and teen pregnancy prevention and place it under the control of Valerie Huber, an abstinence-only activist who was appointed by Trump in 2017. U.S. Senator (D-WA) Patty Murray questioned the HSS’ motivation: “It is difficult to understand how this reorganization does anything other than consolidate control at HHS headquarters,” she wrote in a letter, “and prioritize ideology over the needs of the women, teenagers, and children the affected programs serve.”

Not that we should be surprised: Abstinence-only programs have always been based in patriarchy. House Democrats even detailed that abstinence-based curricula reinforce “gender stereotypes about female passivity and male aggressiveness” in a 2004 report.

Some of these programs compare sexually active teens to chewed-up gum; others compare them to cups of spit or used pieces of tape. Some teachers call students who aren’t virgins “tainted” and “impure.” And in most classrooms, the people being shamed for their sexual lives are young women and girls.

Young people are speaking back—and demanding better from their national leaders. In partnership with Trojan, Advocates for Youth today will erect a 20-foot activist billboard covered in chewed-up gum speaking truth to power. “You Are Not Chewed Gum,” it will read. “Information Is the Best Protection.”

Today’s display will be on Capitol Hill in the Union Square area of the National Mall from 9 a.m. to 6 p.m. (Ms. will be distributing live reports from the field on Instagram!)

Jonathan Chang is an editorial intern at Ms. 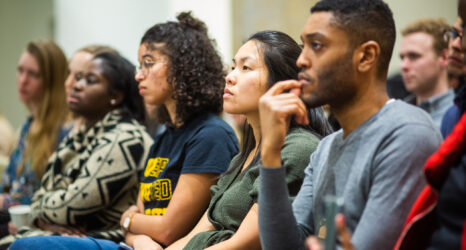