Judicial Watch Round-Up: What Happened in the Courts in 2019 - Ms. Magazine
Skip to content

President Donald Trump and Senate Majority Leader Mitch McConnell will stop at nothing to achieve through the courts what their party cannot accomplish legislatively: erasing the progress our nation has made to recognize and protect hard-fought civil rights.

Indeed, instead of passing crucial legislation that would restore and safeguard our voting rights, for example, McConnell is actively installing nominees with demonstrated records of creating and defending the most egregious efforts to block access to the ballot box. Senate Republicans have confirmed lifetime nominees who defended Ohio’s notorious voter purge law and argued for some of the nation’s most restrictive laws that would deny voting rights to millions of people.

The intentional damage of this administration and McConnell’s agenda was in plain sight recently when two Fifth Circuit judges—one of which, Kurt Engelhardt, is a Trump appointee‚issued a devastating decision that jeopardizes life-saving health care access for millions of people. Trump and McConnell have consistently installed judges who are hostile to the Affordable Care Act, including the lawyer who filed a brief refusing to defend the law.

This is their agenda.

With 187 lifetime judicial confirmations to date, the president and McConnell are taking over our federal judiciary for decades to come by installing unqualified individuals who jeopardize our civil rights. In three years alone, they have transformed nearly one-fifth of the entire federal judiciary and a quarter of all circuit court judgeships. McConnell even tried to cement this damage by rushing through 13 additional lifetime judges onto our district courts before the end of 2019.

Trump and McConnell’s rush to stack the courts with these biased nominees has been facilitated by their attack on the entire judicial selection and confirmation process. Senate Republicans have intentionally hidden the alarming records of lifetime nominees, including stacking hearings with multiple circuit court nominees and limiting floor debate time on district court nominees to just two hours. They have side-stepped their Democratic colleagues by abrogating the traditional consultation role of home-state senators in the selection of circuit court nominations, a mechanism that in the past served as an important check on the president. We’ve even seen seven of nine nominees who lack basic competence and/or temperament and were rated Not Qualified by the American Bar Association confirmed to the bench.

Trump and Senate Republicans rigged the system so they could jam through nominees who threaten the integrity and independence of the judiciary. Our courts and our rights matter too much to rush this process. More than 99 percent of all federal cases, covering issues we care deeply about, are decided by district and circuit court judges every day.

The confirmed judges mentioned below are representative of the types of individuals that Trump and McConnell promised to fill the courts with—and they are betting on them to carry out their menacing agenda during our lifetimes.

Here’s what that means.

Donald Trump nominated, and the Senate confirmed, a barrage of ultra-conservative anti-LGBTQ judicial nominees this year: Matthew Kacsmaryk to the Northern District of Texas, Neomi Rao to the District of Columbia Circuit, Eric Murphy to the Sixth Circuit, Howard Nielson to the District of Utah and Lawrence VanDyke to the Ninth Circuit, among many others.

Many of Trump’s nominees have made a career out of arguing against marriage equality and challenging the Equality Act. Equally disturbing, some of them promulgated dangerous lies, including that being transgender is a “delusion.” VanDyke was actually found to be Not Qualified by the American Bar Association because his peers believed he would not be fair to LGBTQ people in his courtroom—something he refused to say he would affirmatively do.

Donald Trump campaigned with a shortlist of people for a Supreme Court seat held open by McConnell that he promised would gut Roe v. Wade, a central goal of his administration. Unsurprisingly, many of his appointments hold extreme views on reproductive rights and health care access.

Republican senators confirmed biased judges like Sarah Pitlyk, rated unanimously Not Qualified by the ABA; Wendy Vitter and Brett Kavanaugh, among many others — spurning the will of most Americans who support reproductive freedom and oppose attempts to undo Roe.

Some have gone out of their way to represent clients that would allow them to defend the most restrictive laws our nation has seen. The terrible and long track records of these nominees include defending unconstitutional abortion bans, challenging in-vitro fertilization and surrogacy, calling on the Supreme Court to “revisit” Roe and arguing against contraceptive access.

While there’s no place on the federal bench for these extreme ideologues, stacking our federal courts at every level with judges who are beholden to the anti-reproductive freedom movement is part of their long-term strategy to roll back the clock on our civil rights, particularly reproductive rights.

The Trump administration is utilizing the judiciary as a central component of their assault on voting rights. The president has already appointed an alarming number of nominees with atrocious voting rights records, and 2019 was no different. Last year, this blatant pattern continued with the confirmations of Andrew Brasher to the Middle District of Alabama (and now nominated to the Eleventh Circuit), Eric Murphy and Chad Readler to the Sixth Circuit, J. Campbell Barker to the Eastern District of Texas and Brantley Starr to the Eastern District of Texas, among many others.

All of these appointees have enabled and defended voter suppression efforts. The consequences are far-reaching and devastating, should these confirmed judges successfully inject their extremism into the courts. Indeed, Trump is banking on them to apply their narrow-minded interpretation of the law to restrict the most fundamental right in our democracy: the vote.

Trump and his conservative allies are trying to take away our health care through extreme, ideologically motivated judges because they repeatedly failed to do so legislatively. The Fifth Circuit’s 2-1 decision last month furthered that agenda, hoping to set the stage for a second Trump administration attempt to strip health care away from the millions of Americans who the law protects, including those with pre-existing conditions.

Let’s be clear: The Senate GOP’s health care plan is to rely on these judges to uphold their lawsuit dismantling the ACA. The outcome of the lawsuit could be devastating, especially to communities of color, women, people with disabilities and anyone else with pre-existing conditions. Senators who supported nominees like Chad Readler and Howard Nielson are responsible.

While many of Trump’s nominees are terrible on educational equity—one look at Steven Menashi’s record says it all—we are also troubled by the confirmation of a number of nominees who failed to unequivocally state that Brown v. Board of Education was correctly decided.

On May 17, our nation commemorated the 65th anniversary of the Supreme Court’s unanimous Brown v. Board ruling that struck down the shameful doctrine of “separate but equal.” We called on senators to oppose all judicial nominees, like Wendy Vitter and Jason Pulliam, who refused to state that this landmark decision was correctly decided.

While there has been a shift in judicial nominees’ willingness to affirm Brown—and some have clarified their answers on the record—senators are still confirming many nominees who fail to meet this moral floor. This is unacceptable.

Senators must be clear on this standard, not continue to lower the bar. In fact, responsible leadership requires that the Senate remain vigilant to ensure that we do not regress to the era when “separate but equal” was law, or even an open question. The American people and their justice system deserve better.

The Trump administration’s relentless onslaught of attacks against immigrants have been nonstop for three years, but the president is not solely responsible. The administration has relied heavily on systems that are already in place to pursue his anti-immigrant agenda, and the judicial nominations process has been integral to that.

Stymied by the courts from enforcing his unconstitutional immigration measures, the president is keen on transforming our federal courts to get his way. That’s why Trump recently appointed Steven Menashi to a seat once held by Thurgood Marshall on the U.S. Court of Appeals for the Second Circuit, a man who worked alongside Stephen Miller in architecting this administration’s most draconian immigration policies.

Wade Henderson, our former president and CEO, once told the Senate that immigrant rights is the yardstick by which we measure our commitment to the rights of all individuals. What Trump and McConnell are doing is unacceptable.

Trump and McConnell are corrupting the federal judiciary by confirming individuals who lack the experience and fair-mindedness required to serve on our federal courts—and they are rushing them through to hide their terrible records. These biased judges would have no qualms with attacking individuals simply because of their identity.

This is all part of their agenda: when all else fails politically, confirm judges who lack respect for precedent and who will roll back our hard-fought rights and freedoms. But no robe can disguise these confirmed judges’ anti-civil rights records.

It is time to put an end to this extraordinary power grab by Republicans to effectuate their agenda to further restrict our civil and human rights. Our rights and freedoms depend on it.

Rafael Medina is the communications manager at the Leadership Conference on Civil and Human Rights. 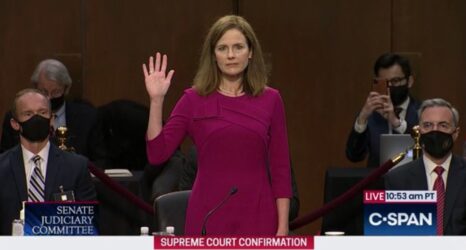