Trump promised to remake the federal judiciary in his image at a reckless rate by confirming more than 180 judges by the end of this year. With 164 judicial confirmations, Trump, enabled by Senate Majority Leader Mitch McConnell, is taking over our courts by installing unqualified and biased judicial nominees who jeopardize our civil rights. To date, together they have filled nearly one-fifth of the entire federal judiciary, and one-quarter of all circuit court judgeships. Stymied by Congress, Trump and McConnell are trying to transform our courts in order to implement the party’s failing agenda. And the harm caused by this deliberate attempt to roll back our civil and human rights by filling the courts with anti-civil rights nominees will be felt for decades to come.

This is significant: More than 99 percent of all federal cases are decided by district and circuit courts.

Every issue from immigrant justice to voting rights to health care is impacted by the decisions that judges make every day. The Senate Republicans’ plan to jam through nominees who threaten the integrity and independence of the judiciary must be stopped. Our rights depend upon it.

Nominees Who Failed to State that Brown v. Board of Education was Correctly Decided

Komitee and Sinatra refused to unequivocally state that the landmark decision in Brown was correctly decided. We should not regress to the era when “separate but equal” was law, or even an open question. The American people and their justice system deserve better, and our leaders must uphold this moral floor. We are asking senators to vote against these two nominations.

Read The Leadership Conference’s letter and updated list of judicial nominees calling on senators to oppose nominees who refuse to state unequivocally that Brown was correctly decided.

Also coming up for a cloture and final vote in the Senate this week is Trump’s nominee to the Eastern District of Missouri, Sarah Pitlyk. She has defended the most extreme, anti-reproductive health care laws our nation has seen, and the ideological demagoguery that she exhibits goes far beyond her outspoken opposition to Roe v. Wade. Packing the courts with people who will support his ultra-conservative agenda to roll back our civil rights, particularly reproductive rights, is a key pillar of his administration that Trump has advertised. Pitlyk embodies this as she now serves as special counsel at the Thomas More Society, where her job centers on anti-abortion activism. She has also attacked IVF and surrogacy.

Pitlyk once clerked for now-Supreme Court Justice Kavanaugh and was instrumental in vouchingfor him with conservatives, especially on health care, writing: “No other contender on President Trump’s list is on record so vigorously criticizing the [ACA].”

Pitlyk lacks the experience and fair-mindedness required to serve on our federal courts, which prompted the American Bar Association to give her a unanimously Not Qualified rating. In addition, she already has garnered bipartisan opposition, with Senator Susan Collins publicly announcing her opposition to the nomination. Senator Collins opposition is welcome, but we call on others to join her. Pitlyk cannot be trusted with a lifetime appointment.

Read The Leadership Conference’s letter in opposition to the confirmation of Sarah Pitlyk.

On December 4, the Senate Judiciary Committee will likely hold a hearing on Trump’s nominee to an Alabama seat on the Eleventh Circuit, Andrew Brasher. Only a few months after the Senate quickly confirmed him to the District Court for the Middle District of Alabama, Brasher has been nominated to a seat on the appeals court, in order to fulfill the Republicans’ agenda to further restrict our civil and human rights.

Brasher, who has a record of hostility against civil rights, especially voting rights, LGBTQ equality, reproductive freedom and environmental protection, is unqualified and should not be elevated. Our courts are too often the backstop for protecting our civil rights and matter far too much to rush this process. Senators must take their responsibility to consider lifetime appointments to our courts more seriously and stop this nomination.

Read The Leadership Conference’s letter in opposition to the confirmation of Andrew Brasher when he was nominated to the U.S. District Court for the Middle District of Alabama.

Lawrence VanDyke and Patrick Bumatay (U.S. Court of Appeals for the Ninth Circuit in Nevada and California)

In addition, we know that McConnell is likely to schedule final votes for many more of Trump’s lifetime nominees before the end of the year, including unqualified nominees like Lawrence VanDyke and Patrick Bumatay. VanDyke is a conservative movement lawyer who has worked throughout his career to undercut our civil and human rights, including LGBTQ equality, reproductive freedom, and environmental protections. His record is disqualifying, and he lacks the temperament necessary to be a federal judge.

Bumatay is a political operative in the Trump administration, like VanDyke, whose career choices indicate that he will not be fair and independent. Bumatay also played a central role in advancing the nominations of both Neil Gorsuch and Brett Kavanaugh during their Supreme Court confirmation fights.

The full Senate must reject these extreme, unqualified, and unfit nominees.

Read The Leadership Conference’s letters in opposition to the confirmations of Lawrence VanDyke and Patrick Bumatay.

Rafael Medina is the Communications Manager at the Leadership Conference on Civil and Human Rights. 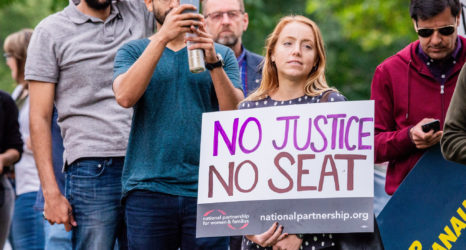 Five Ways to Celebrate the Five-Year Anniversary of Obergefell v. Hodges from Home
SCOTUS Defends Abortion Access—But the Battle is Far from Over
White Supremacy in the Trump Era: A New Online Course with Loretta Ross