"Afghanistan Belongs to All of Us": Afghan Women’s Groups Call to Meet with Taliban - Ms. Magazine
Skip to content

Ahead of the Intra-Afghan talks, expected in days, a coalition of Afghan women’s rights groups have released an open letter to Taliban leadership calling for a peaceful resolution to the four decades of war, reaffirming their position to preserve and build on the gains of the last 20 years, and calling for a meeting with senior members of the group.

The coalition of Afghan women demand they be treated as equal citizens of their country now and in the future of Afghanistan, post-peace talks.

“As we have repeatedly offered, we are prepared to sit down with the Taliban and have a genuine discussion about the needs and challenges of our population and our country,” the letter states. “We have done so with members of the Afghan government and believe it is equally important to engage with the Taliban. We believe this is important because you are a party to the conflict and to the negotiations.”

The women are firm—they will not go back to a time when they were treated as second-class citizens, or even less: “We will not allow our place and contribution towards rebuilding our country to be erased or reversed. More than ever we recognize our capacity to contribute to the wellbeing of our society.”

The Taliban often refers to Afghan women’s demand for equality as Western, and influenced by outsiders. In response, the women’s groups write, “You have often projected our obligation to our country and people as a Western influence and propaganda, but there is nothing Western in Afghan women demanding respect for their dignity and protection of their equal rights.”

The appeal follows a wider campaign by Afghan women, supporters and activists calling for meaningful inclusion in the Afghan peace process, which has largely excluded women. The letter rejects the notion that Afghan women demanding basic rights is a Western influence and instead emphasize that the rights the group demand are inherent to Islam, a majority religion and other faiths practiced in Afghanistan.

Women make up more than 50 percent of the population and their exclusion from the peace process has raised significant concerns in Afghanistan and beyond about the erosion of women and minority rights. A recent Asia Foundation Survey of the Afghan People—the longest running opinion poll in the country—demonstrated a large part of the Afghan population did not want to jeopardize women’s rights for a deal with the Taliban.

In all the letters, Afghan women and their allies have made clear their desire to end to the ongoing war in Afghanistan—but they want a peace in which they are equal citizens of their country now and in the future of Afghanistan.

The letter includes the voices of women from across the country through a series of consultations and interviews.

The full letter is as follows:

Open letter from Afghan women to the Taliban

For the past two years, Afghan women have been observing the ongoing negotiation process in Afghanistan carefully and, like millions of our fellow citizens, we hope that the process can bring the nearly 40 years of conflict in our beloved Afghanistan to an end. We, women, have borne the brunt of the four decades of conflict. As wives, mothers, daughters, and sisters we have suffered terribly, we have been subjected to the brutality and violence of war; we have borne witness to the endless suffering of our families and our people. We, perhaps more than anyone, seek an end to this senseless war. Yet, we, like the vast majority of Afghan women and men, worry that the price of peace may be too heavy if we lose the vitality of more than half of our population and the essential gains achieved over the last two decades.

Your willingness to enter peace talks has given us hope but your public statements and behavior on the ground have continued to trouble us. We have heard from some in your leadership that you have changed and recognize that Afghanistan is not the same country that you reigned over in 1996-2001; that you recognize women’s rights to education and work according to “Shari’a and Afghan traditions”. At the same time, you have resisted explaining your interpretations of Shari’a and the Afghan traditions of which you speak. Respectfully, your interpretation is one of many. There are many customary practices that are in clear contradictions to Islamic values. Some of the more egregious are prohibiting and limiting girls’ education, women’s economic freedom, right to inheritance, the treatment of women and girls as commodities, resolving disputes by giving little girls and women as Baad, preventing and limiting women’s employment and their participation in public life, to name just a few.

In Afghanistan, women continue to be the largest illiterate population. In addition, 80% of our girls are forced into marriage at a very young age, a tradition more common in areas under your influence. While in other Muslim nations women are thriving as successful leaders, politicians and policy makers, actively improving the lives of their fellow citizens, in Afghanistan we are still fighting to be recongized and respected as equal and capable citizens. Muslim women across the Muslim world – in Tunisia, Morocco, Malaysia, Indonesia, Singapore, Jordan, Turkey, Bangladesh, Senegal, Mauritius, even Pakistan and in many others – are enjoying freedom of movement, access to education, employment and access to services, but we are still fighting for our survival.

Despite the significant  challenges and continued threat to our lives, we will pursue our desire to serve our country. Afghanistan belongs to all of us, women and men. We do not view the roles of women and men differently when it comes to the protection and development of our beloved Afghanistan. While the Taliban, in doing so, have often addressed our push to serve our country and our fellow citizens as merely western influence.

You have also dismissed those of us who have been on the frontlines of working on women’s and human rights, accusing us of bringing in western values and practices. In this letter, we represent every part of Afghanistan, rural and urban. We represent the full diversity of Afghanistan including geographical, sectarian and ethnic.

The rights that we espouse and work towards are fundamental human rights enshrined in the holy religion of Islam and other faiths practiced in Afghanistan. As more than half of the population, we have put our lives and those of our families on the line to defend and protect the most vulnerable and those abused. It is the obligation of every citizen, regardless of their gender or ethnicity, to engage in improving their lives and the lives of their families, friends and fellow citizens.

Afghan women demanding respect for their dignity and protection of their equal rights is not a western ideal or idea. It is part of our long and proud tradition of responsible citizenship – we do not view putting our skills to work to improve our country’s future towards prosperity as western. In the last two decades, we have played a vital role in rebuilding our destroyed country. We have done so as scientists, doctors, technologists, entrepreneurs, judges, religious scholars, engineers, lawyers, teachers, university professors, security officials, journalists, artists, and rights activists across the country. You know this first line seems repetitive and not necessary.

We will not allow our place and contribution towards rebuilding our country to be erased or reversed. More than ever we celebrate our capacity to contribute to the wellbeing of our society. We will not allow the potential, talent, the rights and dignity of our daughters and sons to be stripped once again for political gains and posturing.

As we have repeatedly offered, we are prepared to sit down with the Taliban and have a genuine discussion about the  needs and challenges of our population and our country. We have done so with members of the Afghan government and believe it is equally important to engage with you. We believe this is important because you are a party to the conflict and to the negotiations. For the last two decades, your leadership and command have been living outside of Afghanistan and you have not been exposed to the flourishing progress in our country.

We believe that by sitting together we may overcome the polarized views that you have expressed about Afghan women and the future of our country.

It is the dream of every responsible Afghan, including your children who live outside Afghanistan, to live in a country in which the role of every Afghan will be vital to rebuilding our country and ensuring that we become a sovereign, independent, sustainable and peaceful country in the region and international community.

For peace and justice,

Makhfi Azizi is the director of the Campaign for Afghan Women and Girls at the Feminist Majority Foundation. She has been working with the foundation in this capacity for two years and works on issues of human rights, peace and security. Makhfi is dedicated to women’s equality, peace and democracy.

In This Crucial Time, History Must Not Repeat for Afghan Women 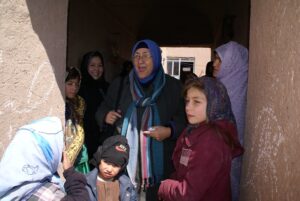 Afghan Women: “We Shouldn’t Have To Ask Babies And Mothers Not Be Killed”