Mere weeks from Election Day, it’s clear Republicans’ main goal is speed, as they continue to push through the confirmation—despite the fact that over 7 million voters have already cast their ballots and despite the blatant hypocrisy after their yearlong blockade in 2016 against President Obama’s nominee, Merrick Garland.

This Republican strategy became immediately clear on the night of Justice Ruth Bader Ginsburg’s passing: Less than an hour after the news of her death broke, Sen. Mitch McConnell vowed he would move forward with Trump’s nominee to replace Ginsburg on the Supreme Court.

Tuesday’s and Wednesday’s hearings begin a Q&A period. On Thursday, the final day, outside witnesses are expected to testify for and against Barrett’s nomination.

Under committee rules, Democrats can postpone the nomination for one week, and they have made clear they will employ every tool at their disposal to do so—plus “certain creative tactics that rely upon the element of surprise,” wrote Senate minority leader Chuck Schumer (D-N.Y.).

The committee is expected to vote on Oct. 22. From there, McConnell will decide how quickly to move the nomination to the Senate floor—but he’s eyeing an Oct. 29 floor vote.

On Monday, Sen. Mike Lee (R-Utah), who tested positive for COVID-19 only 11 days ago, worked and spoke maskless in-person in the committee room.

Speaking remotely from her Senate office, Sen. Kamala Harris (D-Calif.) hit the entire Judiciary Committee for convening in-person at all, saying the hearings should have been postponed because of coronavirus concerns and that the committee has not taken enough precautions to keep people safe:

“This hearing has brought together more than 50 people to sit inside of a closed door room for hours while our nation is facing a deadly airborne virus. This committee has ignored common sense requests to keep people safe—including not requiring testing for all members—despite a coronavirus outbreak among senators of this very committee.”

Sen. Patrick J. Leahy (D-Vt.) echoed this same sentiment in his (remote) opening remarks: “We should not be holding this hearing when it’s plainly unsafe to do.”

In 2016, when debating consideration of President Barack Obama’s nomination of Merrick Garland for a seat on the Supreme Court (previously held by Justice Antonin Scalia), 36 Republican senators refused to even schedule hearings, citing the inability to confirm judges during an election year. But now 31 of them have gone back on their word.

Richard Blumenthal (D-Conn.) pulled this thread on Monday, calling the Barrett hearings a display of “raw political power: [Republicans are] doing it because they can. But might does not make right.”

Several Democrats on the Judiciary Committee—such as Sen. Mazie Hirono (D-Hawaii)—cited recent polling showing that a majority of Americans (74 percent) want Congress to focus on stopping the spread of coronavirus and on economic relief, rather than ram through a new SCOTUS nominee.

Hirono spoke personally about her battle with cancer, arguing the Senate should focus on health care and calling the nomination hearings for Barrett a “hypocritical, illegitimate process.”

Other Democrats raised the same points on Monday:

Up and down the ballot—from top party leaders like Chuck Schumer, Nancy Pelosi and Joe Biden; to rank-and-file members—Democrats are squarely focused on health care (a winning topic for the party, as the 2018 midterms made clear).

Democrats have relentlessly tied Barrett’s confirmation with the fate of the Affordable Care Act (ACA)—set to go in front of the Supreme Court just a week after Election Day, on Nov. 10.

Barrett has made her stance on the ACA clear: In 2012, Chief Justice John Roberts surprised many by becoming the deciding vote to uphold the ACA. In 2017, Barrett herself condemned Roberts’s decision in the 2012 case for having “pushed the Affordable Care Act beyond its plausible meaning to save the statute.”

Politico wrote on Monday morning of the hearings:

When Barrett sits down in front of the Senate Judiciary Committee for her confirmation hearings this week, expect to hear the acronym “ACA” at least as much as you hear “ACB.”

And this was certainly the case.

Democrats attempted to tap into voters’ (and Barrett’s) humanity with a barrage of first- and secondhand accounts of constituents whose lives are better off as a result of the ACA.

Sen. Patrick Leahy, a Democrat from Vermont, outlined what’s at stake for his constituents—and for all Americans:

“[The Vermonters I represent are] scared, Judge Barrett. They’re scared that your confirmation would rip from them the very healthcare protections that millions of Americans have fought to maintain, and which Congress has repeatedly rejected eliminating.

“They’re scared that clock will be turned back to the time when women had no right to control their own bodies, and when it was acceptable to discriminate against women in the workplace. They’re scared that a time when we’re facing the perilous impacts of climate change, bedrock environmental protections are going to be destroyed. And they’re scared that your confirmation will result in the rolling back of voting rights, workers’ rights, and the rights of the LGBTQ community to equal treatment.”

Senate Democrats raised another chilling point: If the ACA is overturned, federal protections for those with pre-existing health conditions would end—meaning that insurers could deem COVID-19 as a pre-existing condition and exclude coverage for the condition.

Barrett’s affiliation with the Catholic group People of Praise has raised concern due to the group’s belief in traditional gender roles. (In fact, Barrett herself served as a “handmaid“—a term used for high-ranking women leaders in the group.)

As such, many Republicans were quick to paint Democrats’ protestations against Barrett’s nomination as religiously-motivated.

On Monday, Sen. Josh Hawley (R-Mo.) attacked Democrats for what he perceived to be veiled attacks on Amy Coney Barrett’s Catholic faith—something he called a “pattern and practice of religious bigotry.”

In reality, during the first day of hearings, it was exclusively Republicans, not Democrats, who referred to Barrett’s religion.

If nominated, Barrett would join five other Catholic justices presently on the Court. Like Barrett, Democratic nominee former Vice President Joe Biden identifies as a Catholic. If elected, Biden will become the second practicing Catholic to assume the role of president. (The first was John F. Kennedy.)

If you agree with the 74 percent of Americans who believe the Senate should be prioritizing COVID-19 relief, instead of pushing through a lifetime appointment to the Supreme Court, call your senators at (202) 224-3121. 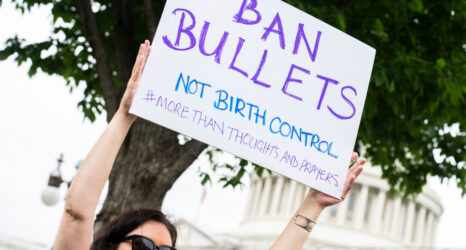 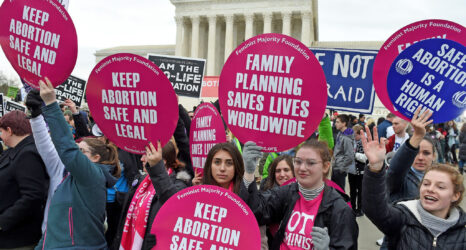 We’re the Women Who Chose Adoption Over Abortion. Ask Us Why Abortion Rights Matter

Supreme Court Displays Contempt for Women’s Rights in Unprecedented Decision
What Was Justice Alito Thinking?
Weekend Reading on Women’s Representation: Women Leaders Reckon With a Loss of Abortion Rights; The Lack of Women at G7