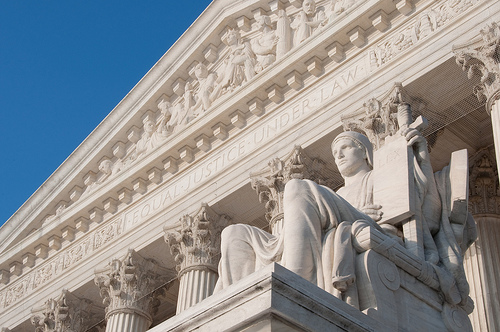 Justice John Paul Stevens announced on Friday that he intends to step down from the bench of the U.S. Supreme Court, and the belly-aching began almost immediately.  The whole notion that White-men-need-not-apply for the soon-to-be-open seat caused cries of radicalism, presumably because a person of color or a woman in a position of power unbalances the notion that White men are the preordained, natural rulers of all they survey. I suppose this is what happens when you let a “master chameleon,” a “young, inexperienced guy, who is just mad,” live in the house that slaves built–the whole world just goes to hell.

Judging from the racist and sexist attacks that Justice Sonia Sotomayor underwent during her confirmation process, should President Obama dare to once again pick someone for the U.S. Supreme Court who is not White and male, the new nominee will certainly undergo attack. In this so-called post-racial world, we don’t see racism unless White men feel that their privilege is being challenged. And then, of course, it falls under the pattern of reverse racism because that is the only kind of marginalization that counts–even if it is only a figment of the imagination.

To date, there have been three women on the U.S. Supreme Court–Sandra Day O’Connor, Ruth Bader Ginsburg and Sotomayor–only the last being a woman of color.  There have been two African-American men, Thurgood Marshall and Clarence Thomas (we hate to write those on the same line).  And then there have been 106 White men.

If White men are looking for affirmative action in this situation, it’s only because they want to stake a claim of ownership over the Supreme Court.  Of course they believe they’re the best for the job, because they want the law to be interpreted only through their experiences and their privilege.

When Sonia Sotomayor commented, “I would hope that a wise Latina woman with the richness of her experiences would more often than not reach a better conclusion than a white male who hasn’t lived that life,” White men were quick to protest their own neutrality. If this were, in fact, the truth, the world would not reflect their biases and needs.  Glenn Beck on Fox quickly labeled Sotomayor a “racist” who is “not that bright” and “divisive,” while Rush Limbaugh chimed in with:

White male conservatives would like us to believe that simply because a few people of color hold positions of power, the balance has shifted. Nothing could be further from the truth.  People of color in those positions are a symbol that we have undergone some change, but a complete metamorphosis has not occurred–and, in fact, that is what the rage and loud outbursts of the conservatives are attempting to quash.

Glenn Beck suggests that Obama will now find a “gay, handicapped, black woman, who’s an immigrant” who’s a “radical” justice like Sotomayor. To that I say: Yes, please! The Supreme Court should be an accurate reflection of the population and not a platform to actively promote White male supremacy.