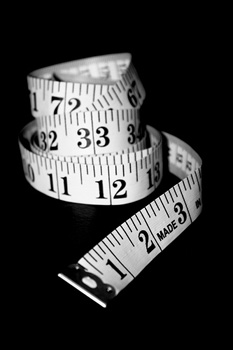 As a TV news anchor, Frances Leland (not her real name) was well aware that her looks had played a primary role in getting her on air. She was blond, blue-eyed, tall and shapely as a Barbie doll–perfect for the Texas market. But that Barbie label also implied a certain air-headedness, which she fought mightily.

“Just because I was a beautiful woman didn’t mean I was an idiot,” Frances told me, looking back over her TV career.  “I went out of my way to prove my worth in the newsroom. I worked my way up as a reporter to the anchor chair.  I knew how to shoot and edit my own stories and I’d produced my own newscasts. I was damned if I’d let anyone think I was going to skate on my looks.”

Nevertheless, her bosses made it clear that all that experience wouldn’t save her career if she let her looks fail.  In particular, she was expected to maintain an ultra-lean body that would still look slim despite the illusory five pounds added by the camera.  Although a dedicated runner, Frances couldn’t sustain her “perfect” weight without resorting to unnatural means. Bulimia became her coping mechanism, a way to keep up that idealized front while “letting herself go” behind the scenes.  “I couldn’t handle the intense scrutiny of being the ‘TV lady’ and living up to others’ expectations,” she told me.  Her eating disorder continued in secret, gradually intensifying over her 15 years in front of the camera.

The secrecy made her cringe whenever her co-workers’ complimented her on her appearance. “Look! She can eat whatever she wants and she doesn’t gain weight!” Those watching her every move were often larger women who worked off-camera in lower-paying jobs that didn’t depend on their looks.  Frances sensed that their envious but objectifying remarks were fueled by the myth that anyone who looks good must also have a perfect life.  Because she was, in a sense, being paid to support this myth, Frances felt she had no choice but to go along with it.  But this made it impossible for her to relax around the people with whom she spent 12 hours a day. She didn’t dare reveal the vulnerabilities that made her human.

The myth of pretty perfection reflects a prejudice that either ignores or trivializes the real lives of people who “look good”. “It was incomprehensible to others that I might have insecurities or my own fears,” Frances recalled.  But those hidden insecurities and fears began to dominate her life.  “Thinking someone else I love will make me a whole person. Never feeling like I do enough, that I’m not worth all the good things I’ve earned–I’ve always wondered how I actually got to where I am.”  She was trapped in the pretty paradox: how could she address her problems if she wasn’t allowed to have any problems?

“As my name and face became better known in the community, I pulled further and further into myself and away from people.” She also got angrier and more resentful of her beauty. “My TV career was based in large part on my looks. Fine, I accepted that. But, I didn’t go out of my way to preserve that illusion of TV anchor perfection in my personal life. Maybe I rebelled against the whole outward beauty thing because that’s what people expected me to be.”

Worst of all, she found, were the proprietary attitudes of men who had risen to positions of power without regard for their looks, yet who treated Frances’s appearance as a commodity that they had the right to control. One incident still made her blood boil years later. She’d stopped in the studio kitchen for a snack.  Despite the emphasis on looks and glamour for the on-air talent, spreads of sugary baked goods are standard fare in most TV newsrooms, and Frances was reaching for a chocolate chip cookie when her male producer snapped, “Don’t eat that. I don’t want my anchor getting fat.”

Stunned, Frances retorted, “Don’t you ever tell me what I should be eating.”

Storming away from him that day was the beginning of the end. “I left TV at the height of my career and a lot of people couldn’t understand why. Of course I know I left because I’d reached a point where I could not live the way I was living anymore.”

Today Frances works in community relations in the energy industry, earns less money and endures considerably less public scrutiny. She’s been treated for her eating disorder and no longer binges or purges. She runs marathons. And her concept of beauty has radically shifted.

“I’m most comfortable in my running clothes, stinky and sweaty after a long run in Houston’s legendary summer heat. I don’t wear makeup when I’m on the roads. I feel strongest when I’m running and looking like hell.  Out there on my own I’m proud not to be ‘beautiful.’”

Photo courtesy of: http://www.flickr.com/photos/pinksherbet/ / CC BY 2.0