The Next 10 Myths About Abortion - Ms. Magazine
Skip to content 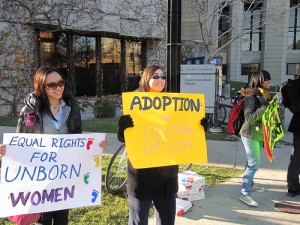 Last week, I posted the 10 Worst Myths About Abortion. Since I couldn’t cover all of the many bad myths, here are the next 10:

Fact: Of the approximately 42 million abortions that occur annually worldwide, almost half are unsafe and/or illegal. Making abortion illegal will not stop women from having abortions; it will only make abortions more dangerous.

Fact: A 2003 review of existing human and animal studies conducted by the U.S. National Cancer Institute (NCI) concluded that having an abortion or miscarriage does not increase a woman’s subsequent risk of developing breast cancer.

Myth 13: Pregnancy as a result of either rape or incest is extremely rare.

Fact: The callousness of this statement always shocks me, and it’s no consolation to the girl or woman who finds herself pregnant as a result of rape or incest. If a rapist does not use protection (and the victim isn’t using contraception), the chance of a pregnancy is the same as any instance of unprotected sex. In the U.S., it’s estimated that 4.7 percent of rapes will result in pregnancy.  In addition, women who are repeatedly raped–such as victims of ongoing incest–are more likely to become pregnant. Internationally, rape is often used as a weapon of war, with some militias setting up rape camps designed to impregnate women as a way of humiliating and stigmatizing them.

Fact: Emergency contraception prevents ovulation and is not effective once the fertilized egg has been implanted on the uterine wall. It will not cause an abortion but can prevent an unwanted pregnancy.

Myth 15: Having an abortion can cause infertility.

Fact: A safe, uncomplicated abortion should not affect a woman’s ability to have children in the future.

Myth 17. Adoption is an alternative to abortion.

Fact: The alternative to abortion is giving birth. Adoption is an alternative to keeping and rearing a child. Adoption should be about finding loving homes for children, not creating children to be adopted. Furthermore, there are no guarantees that a child will be adopted. In the U.S. alone, there are currently 114,000 children in foster care who are eligible for adoption.

Myth 19: It is impossible to be personally opposed to abortion and be pro-choice.

Fact: Pro-choice simply means that you believe abortion should be a choice for women. Whether you would choose it for yourself is irrelevant.

Myth 20: All religions believe abortion is a sin.

I’m sure there are still more myths out there; let me know what I missed!