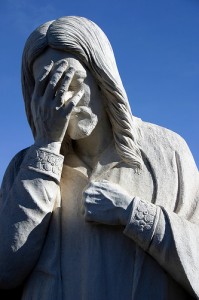 Thanks to two courageous women, the Catholic Church is poorer by multiple-thousands of dollars once again. But both say that no amount of money can compensate them for what they suffered: rape and sodomy by a priest entrusted with their physical as well as spiritual care.

The women, who have asked for anonymity because they still live in fear for their lives, were prisoners at the Federal Medical Center Carswell near Fort Worth Texas, where they were raped, sodomized and threatened with death by a man who should have been the most trusted person in their prison lives: their Catholic priest, Father Vincent Bassie Inametti.

On April 29, Jane Doe I and Jane Doe II, settled for an undisclosed sum in a lawsuit filed against the Catholic Diocese of Fort Worth and Bishop Kevin Vann, alleging that the diocese knew that the priest had a history of sexual abuse of women in other parishes before he was allowed to become a chaplain in an all-women prison.

The priest, a Nigerian, served as a chaplain at Carswell for eight years. In 2008 he pleaded guilty to multiple charges of “sexual abuse of a ward” and is now behind bars in a federal prison because one of the abused women finally got the courage to report him after suffering from two years of what the sentencing judge called  “surprisingly heinous and shocking” sexual offenses. Federal Judge Terry Means of the Northern District of Texas said in court that the women had endured “forced vaginal and oral penetrations by the defendant. … This is rape, and this is sodomy,” the judge said flatly before sending Inametti to prison for four years, the maximum allowed by the law.

The sentencing trial took place in 2008, but it has taken another two years for the women to get justice from the Fort Worth diocese that employed Inametti for a short time before he left to take on the chaplain job at Carswell. The diocese OK’d him for the post after the head of his order wrote that he was “a priest in good standing,” according to diocese spokesperson Pat Svacina. Yet, lawyers for the two women say that Inametti had a history of sexual misconduct with women in other Texas parishes (even fathering a child, whom he abandoned) that was well known to the diocese before he was allowed, “incredibly,”  to be put in the midst of female prisoners, “the most vulnerable and most helpless population in this country,” said Jerry Murad attorney for Doe II. “They were literally captive victims to his sexual violence,” said Tahira Khan Merritt, the lawyer for Doe I.  Svacina denied that the diocese had any knowledge of the past abuse, saying only that there had been “a rumor that he had a child.”

The victory is bittersweet. Both women, now in their 40s and out of prison, say that they live in constant fear. “He told me he would find me and kill me and even my children” when he gets out, said the woman who reported the abuse. “I have terrible nightmares. … Where can I go? Who will protect us?” The other victim said that his death threats to her “constantly replay in my head.” Both were Catholics, but they no longer go to church, believing the church abandoned them in their darkest hours. Neither woman has received an apology from the diocese.

If there is any doubt as to the need for the speedy implementation of the National Prison Rape Elimination Commission’s standards [PDF] for the prevention, detection, response and monitoring of sexual abuse in prison, now being held up by corrections officials, these women’s cases should put such doubts to rest.

The Carswell facility where Father Inametti was chaplain is the only full-service hospital for female federal prisoners in the country. It has a troubling history of medical misconduct and sexual abuse of prisoners. Inametti is the eighth man to be convicted of or fired for sexual abuse, including rape, of female prisoners at the facility since 1997. But women there say that sexual abuse is much more rampant than that; the eight cases only became known when women overcame their fears of retribution and reported their attackers.