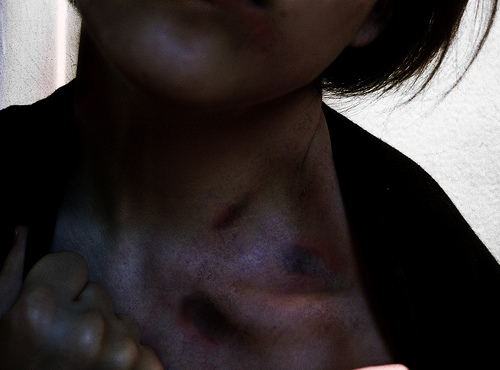 This spring, the Maryland legislature killed a bill that would have brought Maryland’s restraining order policies into line with every other state in the union. Remarkably, in Maryland, a stalking victim seeking help is required to prove her case with “clear and convincing” evidence, a higher standard than “preponderance of the evidence,” which is the universal standard for civil dispute.

There can be only one reason for this absurd requirement: that the Maryland legislators who voted for the bill, listed here, believe that women who testify that they’ve been abused are less credible than men who deny being abusers. That’s not a level playing field, and it’s an absolutely unacceptable attitude for a legislator to hold.

But it’s no mystery where they’re getting this idea. Father’s and men’s rights activists have long promoted the myth that false allegations of domestic violence are rampant, especially in custody cases, and that women frequently file for protective orders in order to gain an upper hand in court. The group Fathers and Families in particular has promoted fathers’ rights propaganda around the country, and has directly targeted legislators. When Maryland Rep. Luis Simmons stated in an interview that he believed it only fair to expunge records of those who had been given a Temporary Restraining Order that didn’t lead to a final order (because a judge dismissed or denied it), Fathers and Families encouraged its supporters to contact Simmons to applaud his statement.

In fact, bona fide false allegations of domestic violence are rare. Dr. Michael Flood wrote in his paper “Fact Sheet #2: The Myth Of Women False Accusation Of Domestic Violence And Misuse Of Protective Orders” that most abused women are reluctant to take out restraining orders:

It is only when women experience more severe forms of violence, such as choking, beating, or being shot at, that they are more likely to take out a protective order.

As experts Rita Smith and Pamela Coukos of the National Coalition Against Domestic Violence wrote in an article for the peer-reviewed Judges Journal:

Although both common sense and the prevailing legal standard dictate careful consideration of evidence in domestic or family violence when determining custody, allegations of domestic violence and/or child sexual abuse made during a divorce or custody proceeding are not always taken seriously. These allegations often are wrongly perceived as false because they are asserted in a contentious environment and because of the widespread myth that parents fabricate domestic violence and child abuse allegations in order to gain an advantage in court. When combined with the misuse of psychological syndrome evidence, the perception that a parent has fabricated the allegations often results in unfair retribution against the reporting protective parent.

Furthermore, obtaining a restraining order does not guarantee that an abused woman will be able to gain custody of her children or see her abuse taken seriously. According to Attorney Elizabeth Kates, citing Zorza, Dore, and Rosen:

[T]he high frequency with which RO’s are issued might lead some  skeptics to assume that these orders are granted too easily for minor  offenses and almost any man is at risk of being a defendant. The data  from the new RO database in Massachusetts reflect otherwise. Men  against whom RO’s have been used are clearly not a random draw  from the population. They are likely to have a criminal history, often  reflective of violent behavior toward others.

Thus, it simply isn’t true that women are likely to lodge false charges of child abuse or battering against their spouses in an effort to manipulate or retaliate–the rate of false reports in these circumstances is no greater than for other crimes.

This research and testimony needs to get out there to combat men’s and father’s rights group propaganda, so legislators are not influenced by untruths. To do anything less places an unfair burden of proof on abused women.

Photo courtesy of http://www.flickr.com/photos/sashawolff/ / CC BY 2.0