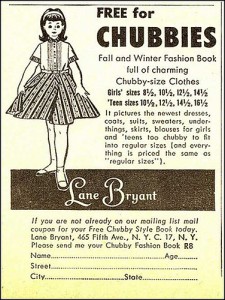 Before hearing from a Lane Bryant employee on what she thinks about the recent controversy over her company’s overtly sexy ad featuring a non-emaciated model in a bra is really about, do me a favor: Name a beloved fat male celebrity. Jack Black, Jonah Hill, Ruben Studdard, Santa!

Now, how about a fat female celebrity? I won’t even ask that she be “beloved.”  Rosie O’Donnell, Roseanne Barr, the ever shrinking/expanding Oprah, Kirstie Alley?

One of these groups is not like the other. The fat male group is more loved, less judged for their body size and more contemporary ; the fat female group has many members framed as being “bitchy” and “too opinionated,” is judged endlessly in relation to body size and is much less current in the zeitgeist (Gossip singer Beth Ditto is arguably a contemporary fat female icon, but hardly as well-known as the likes of Black).

Underneath the brouhaha over whether ABC declined to air the Lane Bryant ad for discriminatory reasons or not lies the pervasive cultural hatred of fat female bodies. The overt sexualization of women in almost all ads is problematic–even when the ad is attempting to reclaim the fat body as beautiful–but in this case other issues are in play.

As pointed out by blogger Artemis Rage, “Fat people need clothing too!” But there is a definite “size segregation” in many clothing stores, which makes stores like Lane Bryant, dedicated to woman above size 12, a welcome relief. She writes:

It’s comforting to me to when I can walk into a store and not feel ashamed for my body size because they don’t carry it, or barely do.

Yet, she bemoans the fact that Lane Bryant and other such stores are  labeled as “plus size” while there is no ancillary label for stores stocking sizes 0 to 12. As Rage writes, “We aren’t just in a different store, we are the other, the abnormal.”

Donna (not her real name), who once starved herself into being a “walking hanger” in pursuit of a modeling career but now works at Lane Bryant, shares similar sentiments about what’s really normal:

I put most of the blame on how women feel they have to look [a certain way] due to Hollywood and the fashion industry. Most women in the U.S. are 5’7 and a size 14! So realistically, those toothpick-looking girls … are the freaks.

Another aspect of fat hatred is fat’s association with a lower-class body, writes Jill at Feministe:

Size, in the United States, is strongly associated with class and attractiveness. … Marketing a plus-sized line is still perceived as signaling a down-scale brand. Designers don’t want their clothes and their brand associated with larger women because it might challenge their brand’s cache.

Rage recognizes this dynamic as well, noting how stores such as Lane Bryant are usually located in hidden back corners of malls–in the mall’s figurative ghetto. While one cannot a body-barrier break, at least the continuing discussion the controversy has launched takes us a small step towards a future less filled with walking hangers.