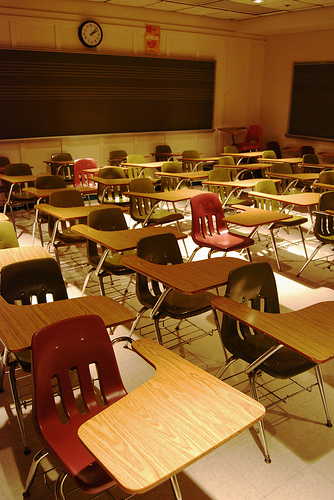 After years of hard work and often a huge investment, college students deserve to celebrate the end of a semester or the completion of their college careers. But unfortunately, as a young African American woman faculty member, the end of the spring semester is more emotionally exhausting than anything else. Many male and female students’ impertinent gendered expectations lead them to approach me as a peer, a potential girlfriend and an imposter—anyone other than an academic authority figure.

Seniors in particular often assume a certain familiarity by semester’s end. Maybe I’m not paying enough attention to the obvious shift from professor to peer, but it always surprises me when students say inappropriate things. Like, “Dr. Utley are your boobs real?”

Or how about the commentary from students who I thought were rapt with curiosity about rhetorical theory, but actually were plotting how they were going to ask me out. On the last instructional day of class, a male student approached me with his cell phone poised and said, “Can I get that number now?”

Final grades had been posted less than twenty-four hours, when a student emailed me (at my school address): “Dear Ebony, would you like to get drinks sometime?”

Shocked at the assumed familiarity, because I always ask my students to address me as Dr. Utley, I nevertheless was polite in my decline. But then he admonished me for coming onto him throughout the semester.

The professor mutation from peer to potential girlfriend is often laughable if I’m in the right mood, but the commentary that positions me as an incompetent impostor is less forgivable. During a final presentation a group of students had aptly titled “The Respect Women Project,” the only male student in the group referred to me by my first name in front of the entire large lecture. So much for respecting one’s professor.

I also often receive visceral missives or evaluations at the end of semesters that communicate students’ gendered expectations of care, almost as if they expect me to mother them. They go something like this:

You are not a true teacher. Isn’t the point of being an educator is to help students pass and move on in their education?

I think it is very immature you will not help me!

I have never had a problem like this with another professor and I am a senior, and from what I hear I am not the only one that feels this way.

Alas, it appears my authority is mostly a suggestion, and when it is begrudgingly granted it’s temporary.

Yes, there is the possibility that I simply rub some students the wrong way, but research shows that young women professors are more likely to encounter rude students than are men. A recent Chronicle of Higher Education study about rudeness noted:

When the researchers broke their data down by gender, they found that 24 percent of men, and just 9 percent of women, could not recall incidents of uncivil student behavior. Women were also much more likely to report that the uncivil behavior they experienced was severe, or to say that they had been upset by it.

In a Men and Masculinities article titled “White Guy Habitus in the Classroom,” Michael Messner argues:

By contrast, students’ experience of women and/or people of color faculty are different, because first, they do not immediately invoke the student’s preconceived image of what a professor looks like, and second, as the semester progresses, the students’ readings of women and/or people of color faculty’s embodied habits often tend to confirm students’ negative preconceptions toward them.

Messner and other female colleagues report that these negative preconceptions happen all the time. I concur and further argue that they are exacerbated by the success and stress of semester’s end.

At the moment when I should feel the most confidence in my students, this type of behavior leaves me frustrated and disappointed. Either they never understood, aren’t sure how to apply, or simply don’t care about the gendered concepts I tried to teach them. As a professor, I take no pride in assigning failing grades—especially when the assignment is everyday life.