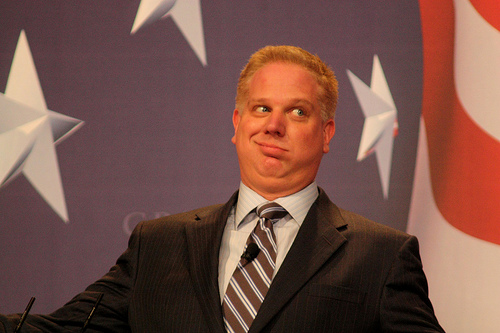 A few weeks back, we polled our Ms. magazine Facebook fans and Twitter followers to see who needed Ms.’s feminist news and commentary the most. Fans voted for some of the most anti-feminist newsmakers out there, and the results are in: Glenn Beck’s tearful rants, paranoid fear-mongering (like his  concern that President Obama would find a “gay, handicapped, black woman who’s an immigrant” to replace Justice Stevens) and his astonishingly sexist statements (like last week’s critique of Michelle Obama— “I’ve never seen the First Lady with her, excuse the expression, but with her breasts all smushed up…”) make him most in need of Ms. magazine’s excellent feminist news and commentary.

We’ve come up with a great way to get Ms.’s feminist coverage to him: We’re starting a vast feminist conspiracy, using guerrilla tactics, to flood Beck’s mailbox with feminist news. Can you imagine his reaction as copy after unsolicited copy of Ms. arrives on his desk? Maybe we’ll even make it onto his show, in a bizarre, blackboard-aided rant about how Ms. magazine is destroying America, and how the feminist ideal of gender equality is yet another piece of the socialist puzzle, a sign of the end times or just one more reason to invest in gold.

Now when you become a “Fight the Right” Ms. member, we’ll send you a year’s worth of Ms.–plus we’ll send a bonus copy of our latest issue directly to Glenn Beck. And if you’d like, we’ll include a note from you telling him that you thought he needed it. 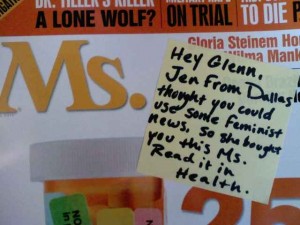 Already a member of the Ms. community? Renew your membership! Already renewed? Get a membership for your mom, your sister, your ex-boyfriend, your boss! Or, you can opt to donate a “Fight the Right” membership to a woman in prison or a women’s shelter. The more new memberships, the more copies Beck receives!

“Fight the Right” members will not only be playing a pretty hilarious prank on Glenn Beck, but they’ll also be supporting the fiercely independent feminist journalism of Ms. magazine, as well as the lifesaving work of the magazine’s publisher,  the Feminist Majority Foundation, one of the largest global women’s rights organizations in the world.