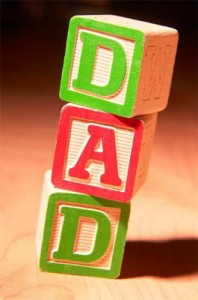 Shopping for Father’s Day cards this year, I was struck by the limited range of familiar stereotypes about Dad: fisherman, golfer, grill-master, handyman, beer-guzzler, remote-control hog, king of the castle, and, of course, the sentimental dear old Dad. As far as I could tell from my informal survey of this domain, the only thing that might distinguish the present-day offerings from those of a few decades ago is that now there are cards with guitars for Rocker Dad. When it comes to fathers, it seems that normative ideas of masculinity still hold sway.

Fortunately, and just in time for Father’s Day,  The Good Men Project Magazine launched online this week, offering alternative views of truly modern dads and other men. Those who are already familiar with The Good Men Project from the anthology and documentary that came out last year know that the men behind it are on a mission. As co-founder Tom Matlack puts it on the magazine’s site, they want to answer a basic question: “What does it mean to be a good man, anyway?”

“Good” is a word that comes up often in their mission language. Without directly referencing feminism, the editors take a stand against patriarchal, authoritarian, heterosexist, racist masculinity and focus on the stories of men who seek intimacy in their close relationships and authenticity in their social roles.  An inaugural feature article for the online magazine is an excerpt from John Badalament’s The Modern Dad’s Dilemma called “How to Be a Good Dad.” Badalament, who conducts parenting workshops and hosts a blog for “today’s dad,” says that what fathers want most now is “connection, closeness and intimacy.” He defines “courage” as a desirable trait for fathers that entails a defiance of gender stereotypes. Be courageous enough, he tells dads, to get down on the floor and play with your kids or to go to PTA meetings. If you’re a stay-at-home dad, he wants you to hold your head high.

Other articles on the site challenge macho ideas about masculinity. In a series called “Man-to-Man,” author Junot Díaz discusses how he learned to be a (good) father by doing the opposite of what his “stereotypical jerk-off irresponsible abusive Dominican womanizer” dad did. A piece by Victoria Medgyesi examines the shortage of positive representations of men as do-gooders in the culture at large. In “Shaving Like a Man,” trans man Tom Forrister talks about getting the hang of an electric razor.

There’s some man-versus-woman posturing in a humorous essay by author Benoit Denizet-Lewis, who claims to be the world’s best parallel-parker. Even though he says that one of the reasons he’s so good is because he’s a man and cites a German study that says women can’t park as well as men can, he includes a link to an extremely clear instructional video in which a majority of the teachers are women, as is the model driver–something that works to counterbalance his gender-based braggadocio.

The Good Men Project Magazine will make you rethink the idea of a men’s magazine. Recommend it to the cool dad on your list, or to anyone who wants to read stories about people coming to terms with what enlightened masculinity might look like in the 21st century.

Audrey Bilger is professor of literature at Claremont McKenna College and Faculty Director of the Center for Writing and Public Discourse. She also teaches gender studies, and occasionally yoga. Her latest book, which she coedited with Michele Kort, is Here Come the Brides! Reflections on Lesbian Love and Marriage (Seal Press, 2012). She is also the author of Laughing Feminism, editor of an edtion of Jane Collier’s 1753 satire An Essay on the Art of Ingeniously Tormenting, and a frequent contributor to Bitch magazine. Her work has been featured in The Paris Review, Rockrgrl, the Huffington Post and the Women's Media Center.

Texas Republicans to Ban Public Schools Teaching History of White Supremacy: “Legislators Need Their Own History Lesson”
The Past, Present and Future of Rep. Allyson Schwartz: “I Understood How Important It Was To Have Women in Positions of Power”
A Call To Action: Reestablishment Of The U.S.-Mexico Border Health Commission