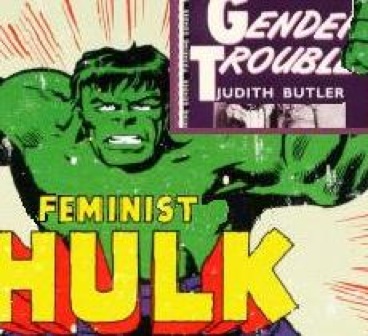 He’s big. He’s green. His favorite activity is smashing patriarchy and all forms of oppression. He’s Feminist Hulk, and since he first burst onto the Twitter scene less than a month ago he’s gathered more than 10,000 followers, who gleefully re-Tweet his 140-character commentaries on gender, feminism and his own personal superhero, feminist theorist Judith Butler. Tweeting in all-caps, this size-XXXXXXL superhero fights for social justice and breaks down the gender binary–all the while looking “smashing” in purple shorts with a big smile on his face.

Here’s how he talks to his Tweeps:

I was fortunate to be granted an exclusive e-mail interview with Feminist Hulk, his first ever. He asked that his “literary life-partner, J.” be included in the interview, as he put it, “TO ELUCIDATE SOME OF HULK’S POINTS. HULK SMASH ON MACRO LEVEL, J BETTER WITH SMALLER DETAILS.” When the two of them get going, it’s plain to see that Feminist Hulk’s Twitter feed is just the beginning of what he has to offer.

Ms.: When did you first discover your feminist superpowers?

feministhulk (to J): WHICH CAME FIRST, THE JUDITH BUTLER OR THE RADIATION?

J: Like a lot of others, I was given a reductive definition of feminism growing up. I later realized how many kinds of feminism there are, which got me excited about the kind of feminist I wanted to be.

Ms.: Feminist theory often gets a bad rap for being too hard to follow and intimidating. Are you trying to translate theory for a general audience?

J: I’m pleasantly surprised at how little of Hulk has required translation. Folks just get it. While I wonder if Feminist Hulk might attract people already familiar with theory, the possibility that Hulk might be making ideas like gender performativity more accessible is awesome! I think it also says a lot about our attitudes toward theory when a big green dude smashing shit is the less intimidating option.

feministhulk: HULK DISLIKE BEING CALLED A “DUDE.” SOUND LIKE HULK SPEND TIME CHUGGING PBR AND READING MAXIM, WHICH IS NOT HOW HULK IDENTIFY.

J: Sorry. Did I hurt your feelings?

feministhulk: HULK OK. THANKS FOR ASKING.

Ms.: “Smash” is an excellent all-purpose word for what theory can do best when it’s working well. How powerful is your smash?

feministhulk: SMASH LIKE A TRAVEL-SIZED VERSION OF BIG BANG. SMASH LIKE BIG GREEN PENCIL THAT ERASE HEGEMONIC GRIDS OF SOCIAL INTELLIGIBILITY AND REPLACE THEM WITH DOODLES OF PRETTY FLOWERS. SMASH LIKE OTHER AWESOME THINGS HULK CANNOT THINK OF RIGHT NOW. HULK EASILY OVERWHELMED BY AWESOMENESS OF SMASH. SOMETIMES, HULK LOVE SMASH SO MUCH HULK GET DIZZY.

J: Does Hulk need to sit down and have a cookie? 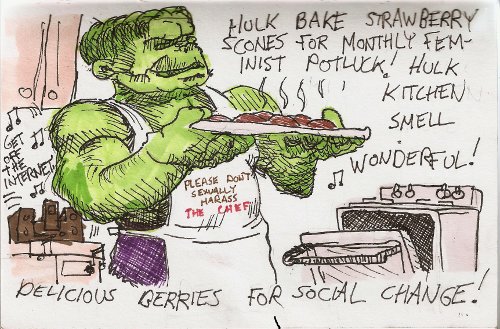 J: The physicality of smash, combined with Hulk’s more abstract tendencies, shows that “theory” and “real life” can join. I sympathize with those who feel like theory doesn’t do enough to put its hands in the daily lives it examines, but I think the line we draw between embodying change and thinking about change is arbitrary. It’s a line that causes damage on both sides.

J: Privilege is worth getting angry about. At the same time, privilege cuts off the possibility of compassion (for those it robs, for those it benefits), which only hardens divisions. Hulk balances anger and compassion.

Ms.: Is humor one of your smash tools?

J: I’m relieved that, no matter how many people find Hulk funny, no one seems to think feminism is the butt of the joke. When Hulk unexpectedly became popular, I worried that new followers might assume that Hulk is making fun of feminism. Our feminism is very sincere. For me, the humor comes from reading references to Goldman and Whitman in Hulk’s voice. I’m motivated by humor and by politics in equal measure.

feministhulk: HULK HAVE PENIS, IDENTIFY AS MALE, SO HULK COULD BE CONSIDERED CISGENDER. HOWEVER, HULK DELIBERATE IN CHOICES, RESIST PRESSURE TO NATURALIZE OR PRESCRIBE GENDER SCRIPT. SO, HULK COULD BE GENDERQUEER. DEFINITELY HAVE GENDERQUEER POLITICS.

J: While I won’t reveal my gender identity here (I think the followers have more fun trying to guess), writing Hulk feels like a genderqueer practice. Slipping between my voice and his highlights to me the performativity of genderplay. My literary life-partnership with Hulk, while nonsexual, is thoroughly queer.

Ms.: We can’t all be superheroes like you. What recommendations do you have for those who might want to nurture their inner Feminist Hulk?”

J: I try not only to pursue change when injustice hits me personally, but also to consider the ways I might be benefiting from privilege without realizing it. Interrogate the places where you are angry, and also interrogate the places where you are comfortable. Be willing to learn new things about your relationship to the world. Be brave enough to keep questioning, keep moving, keep kicking hegemonic ass!

feministhulk: PATRIARCHY NOT WORK ALONE. SEXISM, RACISM, CLASSISM AND HOMOPHOBIA REINFORCE EACH OTHER. HULK SAY TO FOLLOWERS: SMASH ON MULTIPLE FRONTS. AND, JUST IN CASE YOU STUMBLE, BRING EXTRA PAIR OF PURPLE SHORTS.

In 1953, ‘Queen-Crazy’ American Women Looked to Queen Elizabeth II as a Source of Inspiration
The Power of the Youth Vote in Saving U.S. Democracy
The Supreme Court’s Parent Trap