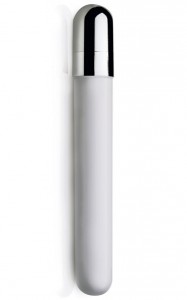 In my mind, consideration of my nether regions is a compelling reason why we need women in science and technology. A serious problem with technological advances is that they often do not reflect the interests and desires of the diverse product base. We saw this with Apple’s iPad naming debacle: Feministing’s Ann Friedman wrote after its debut, “Not a single person who might have said, “Hey, this sounds like a menstrual product, not a revolutionary piece of technology?”

However, with current women-in-technology trends, the next OhMiBod may be a long time coming. A sobering new report by the National Center for Women in Information Technology (NCWIT) found that the number of women earning computer and information science degrees has dropped from 37 percent in 1985 to 18 percent. Only 24 percent of IT-related jobs are held by women (down from 36 percent in 1991), even as computing remains among the top 10 fastest growing professions. For women who pursue IT occupations, there is a pay gap that ranges from 1.4 percent (in technical support) to 14.05 percent (for web developers and programmers).

Recent research paints a clear picture of why women’s representation in technology is so low. Women and girls in science and technology fields face unconscious biases, which manifest in subtle ways, such as tokenism, and overt barriers, such as isolation or competing responsibilities (i.e., work versus family). These forms of bias and discrimination explain the high quit rate of women in technology: 56 percent (compared to 39 percent in engineering and 47 percent in sciences).

The NCWIT report makes a strong case for what businesses stand to gain if they reduce the barriers to women’s participation: reduced attrition, increased innovation and financial gains. We also stand to gain as a nation. In order to stay globally competitive and innovative we need a diversity of experiences, ideas, and perspectives in science and technology.

These are persuasive arguments for the importance of women in these fields. I’m not surprised that the report authors fail to make the case that women’s sexual pleasure might benefit from women’s innovations in technology. But I think we should all be a little hot and bothered by these findings.