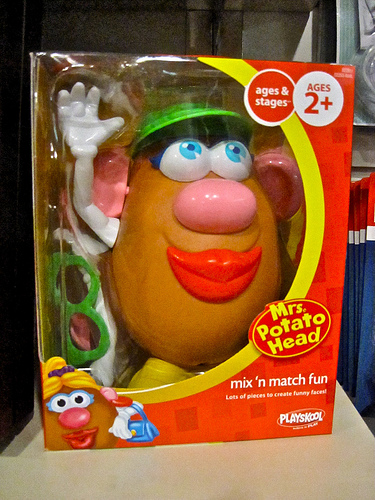 Toy Story 3 opens on a woman-empowerment high, with Mrs. Potato-Head displaying mad train-robbing skills and cowgirl Jessie skillfully steering her faithful horse Bullseye in the ensuing chase. And that’s the end of that: From there on, the film displays the same careless sexism as its predecessors.

Out of seven new toy characters at the daycare where the majority of the narrative takes place, only one is female–the purple octopus whose scant dialogue is voiced by Whoopi Goldberg. Although two of the toys in the framing scenes with Bonnie, the girl who ultimately becomes the toys’ new owner, are female, the ratio is still far worse than the average in children’s media of one-female-to-every-three-males (documented by The Geena Davis Institute on Gender and Media). And these ratios have a real effect: Decades of research shows that kids who grow up watching sexist shows are more likely to internalize stereotypical ideas of what men and women are supposed to be like.

Toy Story’s latest installment revolves around now-17-year-old Andy leaving college. His mom (who has yet to be given a name) insists (in rather nagging fashion) that he store or get rid of all his “junk.” The bag of toys mistakenly ends up in the trash, resulting in the toys landing in a prison-like daycare (way to turn the knife on working parent guilt).

In typical Pixar fashion, male characters dominate the film. Though it ends with young Bonnie as the happy new owner of the toys, making way for more sequels, Woody would have to become Wanda, and Buzz become Betty, in order for the series to break Pixar’s male-only protagonist tradition (think Wall-E, A Bug’s Life, Cars, Monster, Inc, The Incredibles).

Bo Peep is inexplicably missing in this third installment, leaving even fewer female figures. Barbie has a larger role this time around though, as an overly emotional, often crying girlie-girl. She is also a traitor of sorts, breaking away from the gang to go live with Ken in his dream house.

As for Ken, he is depicted as a closeted gay fashionista with a fondness for writing in sparkly purple ink with curly-Q flourishes. Played for adult in-jokes, Ken huffily insists, “I am not a girl toy, I am not!” when an uber-masculine robot toy suggests so during a heated poker match. Pairing homophobia with misogyny, the jokes about Ken suggest that the worst things a boy can be are either a girl or a homosexual.

Barbie ultimately rejects Ken and is instrumental in Woody and company’s escape, but her hyper-feminine presentation, coupled with Ken’s not-yet-out-of-the-toy-cupboard persona, make this yet another family movie that perpetuates damaging gender and sexuality norms.

While the girls in the audience are given the funny and adventurous Jessie, they are also taught women talk too much: Flirty Mrs. Potato-Head, according to new character Lotso, needs her mouth taken off. Another lesson is that when women do say something smart, it’s so rare as to be funny (laughter ensues when Barbie says “authority should derive from the consent of the governed”), and that even when they are smart and adventurous, what they really care about is nabbing themselves a macho toy to love (as when Jessie falls for the Latino version of Buzz–a storyline, that, yes, also plays on the “Latin machismo lover” stereotype).

As for non-heterosexual audience members, they learn that being gay is so funny that the best thing to do is hide one’s sexuality by playing heterosexual, and to laugh along when others mock homosexuality or non-normative masculinity.

Yes, the film is funny and clever. Yes, it is enjoyable and fresh. Yes, it contains the typical blend of witty dialogue as well as a visual feast-for-the-eyes. But, no, Pixar has not left its male-heterocentric scripts behind. Nor has it moved beyond the “everyone is white and middle class” suburban view of the world. Perhaps we should expect no more from Pixar, especially now that Disney, the animated instiller of gender and other norms (a great documentary on this is Mickey Mouse Monopoly),now owns the studio. Sadly, Toy Story 3 indicates that animated films from Pixar will not be giving us a “whole new world,” at least when it comes to gender norms, anytime soon.

CORRECTION: This post has been updated to include Bonnie’s two female toys in the discussion of the characters’ gender ratio.

“In Our Mothers’ Gardens” Celebrates the Legacy of Black Mothers

Despite a History-Making Oscars, Women’s Underrepresentation Behind the Camera Persists

Creating Cultures of Consent: Teaching and Modeling Consent for the Next Generation
Moving the Apostrophe in Mother’s Day: Helping Mothers Around the Globe
Rejection As A Tool For Empowerment: “Career Paths Can Zigzag”