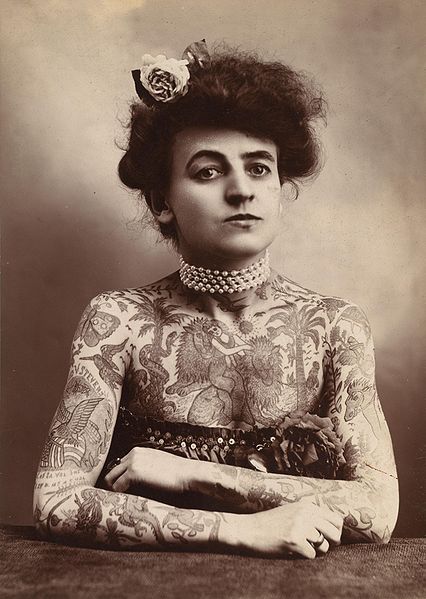 What does it mean to be a tattooed woman in a culture that objectifies your body? In the new documentary Covered, Beverly Yuen Thompson has created an innovative, personal, honest and feminist exploration of women tattooists and tattooed women. In a refreshing change from mainstream media’s coverage, the film talks very little about what individual tattoos mean; instead, Thompson focuses her critical lens on a what it means to be a woman in male-dominated industry.

Though Thompson has frequently incorporated film and visual art in her research, Covered is the first documentary feature for Thompson, who will be an assistant professor of sociology at Siena College this fall. (Full disclosure: long ago she was in a women’s studies classes I taught at Eastern Washington University.)

Apprentice tattooist and heavily-inked Jennifer Wilder sets the tone for the film in its opening minutes: “My tattoos are empowering,” she says. But it quickly becomes clear that “covered” women are not necessarily read by others as powerful. One woman tells us, “They think you’re a whore or something.” A young woman and her Colombian mother tell the interviewer that the mother associated tattoos with people of lower classes and Satanism, and was deeply disappointed to see her daughter’s ink. Thompson also includes footage of herself talking with her own mother about her tattoos. Like other mothers in the film, Margaret Yuen says, “Well, I don’t really like it, but you’re my daughter and I love you no matter what.”

The heart of the film is the parts about women tattoo artists. They talk about how hard it is to do, and how a large part of their apprenticeship involves doing the shop’s scut work such as preparing needles, sterilization, arranging art materials, sweeping and mopping floors and other so-called “bitch work.”

One young tattooist, identified as Shorty, says that “no doors have been closed” because of her gender, while women who have been tattooing for 20 and 30 years talk about clients who refuse to be tattooed by a woman artist. Other clients project role expectations of mother, nurse, slut and more onto them. Legendary tattoo artist Vyvyn Lazonga avoids explains how she came to establish her shop, Madame Lazonga’s, which hires and trains only women artists, finding that she can build with them a stronger ethos of collaboration than with men. In addition to Lazonga, Thompson interviewed some of the other most well-known and respected women in the tattoo industry, such as Keri Barba, Patty Kelly and Sofia Estrella.

Covered is a quiet film; there is no narration, and even though Thompson has included herself and stories of some of her own extensive tattoos, her voice is minimal. We seldom even hear questions posed to tattoo artists and collectors; Thompson stands back and allows the women to speak for themselves. This is also a very personal film, as Thompson explains early on that one of her motivations for making it was to examine the reactions of family members to heavily tattooed women. In the filmed conversation with Thompson’s mother, they note that her father says he’s glad his daughter doesn’t have any tattoos. If he learned the truth, “he would probably have a heart attack.”

As an ethnographer, Thompson includes herself in the film in other ways: There are brief scenes of her editing the film and getting tattooed, and scenes of her working on paintings related to the film. Says Thompson:

Whenever I have worked on major research projects, I have always painted images related to the topics. I like to think visually about the research topics in which I immerse myself. It provides a way to meditate and think deeply about these topics, it is a very reflexive practice for me. I am painting a picture of the participants, which is similar to constructing their edited image in a documentary, or writing about them in an academic journal article. …. These practices are related for me and it shows the reflexive side of how I mediate images of the women.

Watching and listening to the diverse women of Covered, one almost forgets that these images are mediated. The honesty of Thompson’s filmmaking is such a contrast to the stylized and objectifying presentation of tattooed women in other media.

Covered will be screened at the Chagrin Falls Documentary Film Festival this fall, and possibly other festivals this summer. To keep posted on its screening schedule, join its Facebook fan page or visit the official website. Anyone interested in arranging a screening in their community can contact Thompson directly at bevyuen@gmail.com.