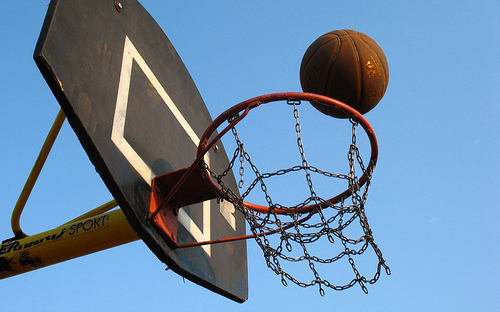 Much to the surprise and then the chagrin of many of my friends, I watched an entire season of the reality TV show Basketball Wives, plus the reunion episode. I kept telling everyone that there had to be more to the show than grown women cat-fighting and emptying glasses of water on each other. Nine episodes later, I’ve finally figured it out.

Basketball Wives is about heartbreak. But with all the posturing and loose affiliations to NBA players, it’s easy to miss the theme.

For example, the introduction depicts the show’s six featured women looking fabulous, glamorous and, well, mean. No one smiles. Evelyn and Shaunie manage a smirk that’s eerily reminiscent of an animal that bares its teeth before an attack. As each of the women pose in front of a blinged-out trophy, they definitely look hardcore.

Furthermore, despite all the talk about being wives, none of the cast is the wife of a current NBA player. Here’s the breakdown:

–Royce Reed, an ex-dancer for the Orlando Magic and the Miami Heat, is the mother of a son by ex-boyfriend basketball player Dwight Howard.

–Suzie Ketcham is retired basketball player Michael Olowokandi’s ex-girlfriend and mother of two children with him.

–Evelyn Lozada is the ex-fiancée of Antoine Walker. They were together ten years and share a daughter.

–Gloria Govan is the current fiancé of Matt Barnes. They have two children and are allegedly planning a wedding.

–Jennifer Williams is the wife of ex-basketball player Eric Williams. She’s the only real wife, but her husband is retired and her storyline for the entire season is her debating whether to divorce him.

Basketball Wives runs fast and loose with the wife title. I wondered:

Are they so few and far between that women of color shouldn’t aspire to be them anymore?

If a woman gets close to being the wife of a rich and famous man, is that simply close enough?

It wasn’t until Evelyn confronted a hater wife in Episode Seven that I realized what the title really meant. Their exchange went like this.

Hater Wife: “You’re not even a wife.”

Evelyn: “So what I’m a f-ing ex-fiancée. I could have been a wife. I chose to f-ing walk away.”

On the other hand, the loosely affiliated featured wives on the show are doing more than competing with other women when they defend their titles. They are rescuing themselves. Even though the women look brazen and sound brash, in their vulnerable moments we can see that they loved hard and were heartbroken when their relationships ended.

Claiming that one was close to wife status is a form of healing. It means what they had was real—realer than a one-night stand and realer than an off-and-on fling. Having been close to being wifed and choosing to walk away probably means to Evelyn that she saved herself from future heartbreak.

How does the woman of a rich and famous athlete survive heartbreak? She reminds herself that she had a real relationship. No matter what the press or people might say, she has a right to hold on to what was good about her relationship if it helps her heal and move on.

And the basketball wives are moving on. Hopefully in Season Two, which airs this fall, they will heal from their heartache and embrace women in similar situations instead of perpetuating a hierarchy among women.

Above image from Flickr user Ryan Fung, under Creative Commons 3.0