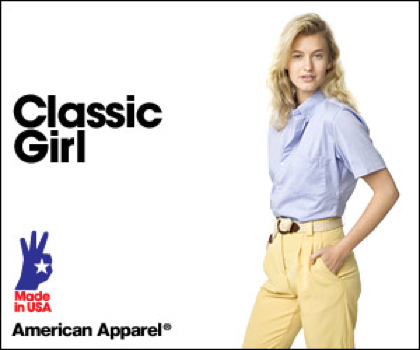 Simple, provocative, to the point: the ad to the left is one Don Draper of Mad Men would’ve adored. This signature ad in American Apparel’s summer campaign could just as easily be from 1962 as 2010.

As Aviva Dove-Viebahn explains in “Feminism in a Mad World” in the latest issue of Ms. magazine, the show Mad Men–which returns to the air for a fourth season this Sunday, July 25–has become “a hot topic on the feminist blogosphere and around water coolers everywhere, alternately lauded for its strong female characters and criticized for its nostalgic rendering of the halcyon days of sanctioned workplace misogyny.” The show’s creator, Matt Weiner, has insisted that by realistically depicting women’s oppression at home and in the workplace, his show ascribes to the feminist agenda.

Mad Men itself might ascribe to the feminist agenda, but thanks to its pervasive impact on pop culture, the show is crafting a whole new generation of would-be Bettys (Draper’s stylish wife) not Peggys (the show’s ambitious “career girl”).

Mad Men has entered the popular consciousness (and checkbook) to an almost frightening degree: Last summer, companies as diverse as Banana Republic, Clorox, Vanity Fair and Variety signed with the show. This July, Mad Men Barbie hit the market, featuring a set of “key players from the Sterling Cooper Advertising Agency.” But we’re left wondering: Hey, where’s the Peggy doll?

Where indeed. Consumers have become obsessed with “the Mad Men look,” but certainly not with Peggy’s sensible shoes. Don knew how to brand at home and in the office, and the show’s sets and costumes are appropriately visually stunning. Yet the aesthetic elements that America adores are signs of a world of masculine privilege predicated on sexism, racism, homophobia–those infinite “isms” that said it was okay for the boys of Sterling Cooper to drink gin-and-tonics in the mid-afternoon while their maids detail the suede upholstery.

Mad Men consumerism replicates the physical trappings of that era with some disturbing cultural implications. Take the American Apparel ad, which doesn’t overtly reference the show but certainly cultivates the look of the early 60s. This is our “Classic Girl,” complete with starched collar, high-waisted pants and blond locks. Cute blonde models are old news in advertising, but this one comes with a special retro twist.

American Apparel ads are infamously over-sexualized. This model’s childish body and innocent look seemingly strike a cleaner note, but her very prepubescence lends the sexuality she does exhibit an illicit air. Oh, those tender red lips, those modest curves, a viewer might croon, unconsciously echoing the words of Humbert Humbert, the pedophiliac hero of Nabokov’s Lolita. Published in 1955 (and made into a hit movie in 1962), the novel shed light on the hypocrisy evident in mid-century culture and advertising. Despite the era’s sexual repressiveness, Hugh Hefner founded Playboy and Little Lolitas appeared in Coca-Cola ads. The appeal of the original “Classic Girl” appeal derives from her girlishness–Humbert delights in dressing Lolita in tennis skirts and polo shirts; pleasures he worries will dissipate once she hits puberty.

The wives who tend to their Mad Men are allowed to grow up–but just barely. Stuck in the suburbs and squeezed into polyester garden party dresses, their emotions denied by their husbands and buried in their beehives, these women have to muffle their sovereignty. So when consumers reclaim the look of this past, they also emulate the “Classic” woman-child it exulted–her signature style of repression and subservience.