More Violence Against the Women of Juarez - Ms. Magazine
Skip to content 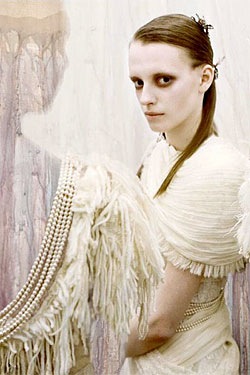 Before I finished my Ph.D., I worked in the cosmetics industry for ten years as a makeup artist for Lauder Corp, which owns such prestige brands as Clinique, Estee Lauder, Bobbi Brown and MAC. The cosmetics industry is often a place where Chicanas and Latinas work their way through school, and I was one of them.

Knowing what I know about the industry and who works in it–and knowing that MAC, in particular, markets to women of color a makeup line that caters to their skin tones with multiple pigments–I am appalled by the lack of social awareness that spawned the Rodarte/MAC collaboration that resulted in the “Juarez-inspired” cosmetics line, with colors such as “Juarez,” “factory” and “ghost town”.

While MAC back-peddled and apologized for its “unfortunate choice of names” and promised to donate a portion of its proceeds from the cosmetics to the people of Juarez, their initial decision to go forward with it signifies the lack of awareness about violence against women that have characterized the Juarez situation for the last 10 years. It seems that the Rodarte designers and MAC have more consciousness about protecting animals from harm in testing products than they do about the human lives lost daily in the war zone that is the city of Juarez. It’s hip to personify death in cosmetic colors rather than engage a bleak and violent reality.

Let me explain. Since taking office in 2005, Mexican President Felipe Calderón has escalated the war against drug cartels, and Juarez has been a loci of retaliatory violence between federal police, the Mexican military, U.S. DEA agents, and drug cartels. The violence from the drug war has become so bad that border dwellers from Mexico have been seeking asylum on the U.S. side because their families and businesses have been threatened.

And then there are the Juarez Femicides or feminicidos–the systematic, often sexualized murder of factory-working brown-skinned migrant women, most recently profiled in the book Terrorizing Women: Femicide in the Americas, edited by scholars Cynthia Bejarano and Rosa-Linda Fregoso. In a series of essays, the authors show how more than 600 women and girls have been murdered and more than 1,000 “disappeared” in the Mexican state of Chihuahua since 1993. They draw attention to the gendered and sexualized forms of power and violence that are used to control the lives of women and girls in communities like Juarez or Guatemala City as the result of women’s changing labor roles in factories often owned by U.S. and Canadian corporations.

The Juarez femicides and lack of justice for the families of the victims are the reason why the MAC/Rodarte colors such as “factory,” or the white woman in the ad for the line who looks deathly pale, are so blatantly offensive. These images are recreating violence against the women of Juarez and Latinas. Death suddenly becomes fashion. For a company like MAC, which serves women of color and drag queens as a large percentage of its clientele, it sure has ignored the intersecting politics of race, class, gender, violence and consumption.

Here’s my message to you, MAC/Rodarte: Read some history before you name your next set of colors and re-violate those who have already been violated.