A Month into Summer of Feminista - Ms. Magazine
Skip to content 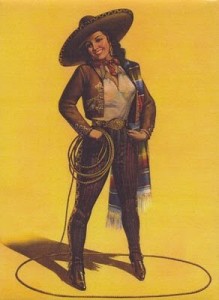 In June I launched Summer of Feminista, a blogging experiment where I am asking Latinas to write about their relationship with feminism, and after a month of posts I am in awe of how similar our stories are, yet how unique as well.

Elizabeth, at 8, was teaching feminism to other third-graders.

A grammar school friend that I had not seen in decades tells me that I taught her about feminism in third grade. This made me think back to the eight-year-old me. Was I a feminist that young? How did I know what that even meant? I remember being very self-aware, especially about being Latina, because I always seemed to stand out among my schoolmates. How did I teach anyone about feminism back then when now, in my mid-30s and a parent, I struggle daily at defining my beliefs?

My mom started to tell us to always go for what we really want in life. “Hijas,” she said, you should be independent, go explore the world, be strong and fight for what you want. My mom herself is an architect with a master’s degree in library studies, as a result she is the only expert in her field in her country, Venezuela, and almost in all of Latin America. She is a designer and a consultant for library buildings. She definitely set the example for us. I admired how strong and independent she was.

I had enough indoctrination of dead white males in the required literature courses. No one mentioned Gloria Anzaldua, even though she walked the same UT campus and probably felt the same stifling oppressive valley heat that I did. The Lorde wasn’t even on my radar, sacrilegious indeed.

Even though I first learned the true essence of feminism from my mother, she does not consider herself a feminist. Sure, she’ll say “I’m a feminist about some things, but not all. Men and women are different! I don’t agree with feminists when it comes to that”. That is her typical answer. And she only considers herself a feminist “about some things” thanks to my influence. Before that, she never even mentioned the word. So why is this? Why do we, especially Latinas, fear this word?

My mother suspected that all this crazy feminist talk was a result of my attending Smith. It also didn’t help matters that I became a Study of Women and Gender major. My mother didn’t agree with this, not only because it was not explicitly connected with a well-to-do, money- making profession but also because of its association with feminism.

The woman that shaped my life and formed my first tribe were indeed strong and luchadoras, but always within the safe confines of their vast and plentiful homes. They treasured their luxuries, their leisure, their freedom and their image.

A central theme emerged in these six tales: All these women had other strong women in their lives guiding them. Even if those women role models said one thing and did another, the message to be self-reliant shone through.

Do check in at Viva la Feminista during the summer as we have even more amazing tales to share!

Pregnancy as Punishment: The Impact of Abortion Bans on Incarcerated Women and Girls
Oakland Museum of California’s ‘Hella Feminist’ Exhibit Grieves, Celebrates, and Provokes
Deshaun Watson’s Slap on the Wrist Is a Slap in the Face to Women and Survivors