Across Oceans, Violence is Violence - Ms. Magazine
Skip to content 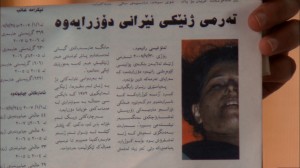 Honor killing. Domestic violence. Murder. Spousal abuse. “She made me do it.”

There may be different names for the murder of women by men in their families, but as first-time filmmaker Mary Ann Smothers Bruni tells Ms., “We’ve got to stop the killing of women in every place.”

In her debut film, Quest for Honor, which premiered last week in New York and opens today in Los Angeles, Smothers Bruni and a team of Kurdish journalists, filmmakers, activists and translators follow three reporters from the Women’s Media and Education Center in Iraqi Kurdistan as they investigate an honor killing.

A young woman, Nesrin, had been found dead, clad in blue jeans and clutching her hair, in a small town near the Turkish border. The motive for her murder is unknown, but after the death of her husband she was homeless and wandered from house to house for shelter. This “wayward” behavior could be considered a dishonor to her family, making the men in her family likely culprits. None of Nesrin’s kin have claimed her body or pressed charges for her death, so the case is unlikely to be resolved–like so many other honor killings around the world.

Such “she made me do it” logic behind honor killings echoes rationalizations for domestic violence. Smothers Bruni describes the archetypal misogynist’s mentality: “It’s women as property, women to be disposed of as man wants.”

Smothers Bruni, who wrote and produced the film as well as directing it, said she could not complete the story without the voice of a woman who had survived. So Quest for Honor tells the story of Sefin, who we see recovering in a secret location following several attempts on her life. Sefin’s husband found she had a cell phone he didn’t know about, which he saw as “evidence” of her infidelity, and an honor killing was attempted by men in her family. She fled to a women’s shelter, but several men appeared there in the night and shot her three times–miraculously she survived.

Smothers Bruni described watching the film with a friend who was shocked and horrified to learn the safe space of the shelter was riddled by bullets. But the filmmaker’s sister-in-law, who founded a women’s shelter in San Antonio, Texas, was not surprised at all. “She said ‘Are you kidding? We had to put bullet-proof glass in the shelter in San Antonio because of men trying to shoot women.’ So I saw parallels,” Smothers Bruni said.

To drive home the universality of this problem, Smothers Bruni included several screens of text at the end of Quest for Honor. The second-to-last screen reads:

Honor killing is not a Kurdish problem.

It is not an Islamic problem.

The killing and trading of women is a universal problem.

And on the final screen:

“You have to say it’s happening here, you can’t just have it one way,” Smothers Bruni said. “One thing I wanted to do with this film though was show that there are people over there fighting it, there are people against it.”

Smothers Bruni believes human rights activists globally must learn from each other, share our journeys and work collectively to end the killing of women:

We’ve got to have international cooperation…Maybe [by] bringing some of them over here [to the U.S.] to work with us and see what strategies we’ve used, and also going over there and learning their strategies to make this an international fight against the killing of women.

ABOVE: Photo of Nesrin in Rewan, a newspaper published by the Women’s Media and Education Center. From Quest for Honor.