The Makings of the Modern Heroine: Truong’s Bitter in the Mouth - Ms. Magazine
Skip to content 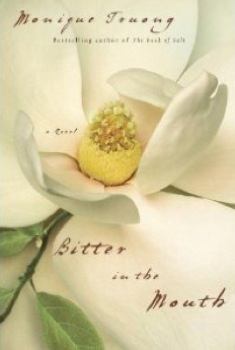 Like so many outsiders, Linda(mint) Hammerick is a synesthete. Unlike Vladimir Nabokov, who, as Linda discovers, saw color in letters and sounds, or Wassily Kadinsky, whose paintings evoke the colors he heard in music, Linda tastes words as she hears and speaks.

Linda is the heroine of Bitter in the Mouth, the new novel by Monique Truong, author of The Book of Salt and the winner of the 2004 Barbara Gittings Literature Award from the American Library Association. This is her tale: A thoughtful child, the sheer volume of taste packed into a simple question like, “Lindamint, where did the Englishmaraschinocherry firstPepto-Bismol settlemustard in Northcheddarcheese Carolinacannedpeas?” prevents her from performing well in school. But everything changes the summer before high school starts.

To fit the social norms of Boiling Springs, Linda’s small North Carolina town, best friend Kelly decides that the two ugly ducklings must turn into swans, and fast; awkward Linda will be the class “smart girl,” chubby Kelly the buxom beauty queen. To focus in class, Linda must combat her instincts with the only means that work: tobacco and alcohol. She becomes a stellar student who goes on to Yale and Columbia Law, yet her condition does not vanish. Indeed, she still finds herself besot with boys whose names taste like parsnips and orange sherbet.

Linda’s extraordinary tale is the coming-of-age story of “smart girls” everywhere. Stuck with a hyperactive brain, she must trade childhood’s overpowering sensations for the social pressures of teenhood and, ultimately, a duller, more liveable reality. Yet she never fully succeeds in shedding her intelligence and the sometimes-troubling insight that comes with it. Linda wonders,

In how many backyards lay the molted skins of girls who vowed to no longer be fat, awkward, and shy? In Boiling Springs, during the summer of ’82, there was only one. America wide, that figure was being closely monitored by the ad sales department of Seventeen magazine. There was money to be made from such tenderness and desperation.

Such observations, on everything from femininity and motherhood to Southern prejudice makes Linda a relatable narrator, even as other biographical facts mark her as an enigmatic outsider. Linda’s quirks are numerous: There’s her epistolary friendship with popular Kelly, which goes unacknowledged in the halls of Boiling Springs High; her adoration for her closeted “singing-talking” uncle, Baby Harper; her secret rape by the yard boy; and especially her adopted status and Vietnamese heritage, which neither the Hammerick family nor Linda as narrator overtly reference until the novel’s close.

One of these events is enough to make a character. When summarized, they seem more like an absurd conglomeration than the makings of a believable plotline. But Linda’s aim is to plumb the depths of her many secrets, to discover the word that inspired her first synesthetic experience: a taste only remembered as “bitter in the mouth.” The mystery sends Linda on a classic post-adolescent quest for self-definition that normalizes these biographical odds and ends, making them seem like events that might naturally happen to a girl desperate–and unable–to know who she is.

Bitter in the Mouth, then, is also a self-realization story. And it’s one that seems to suggest that Linda’s quest is necessary, but her goal unattainable. Linda finally learns the story of her birth when a family death sends her home to Boiling Springs, prompting a reunion with her estranged mother. Yet after so many pages of wondering, the truth, while exotic and beguiling, seems unsatisfying. Linda is unsatisfied too; she concludes,

At least it was a story…We all need a story of where we came from and how we got here.

Once desperate to know the truth, Linda casts off her need for fact, leaving us instead with stories–subjective, deeply personal and potentially false.

Ambiguous to the bitter end, Linda’s conclusion places her in dialogue with feminist authors like Anne Finch, Charlotte Anna Perkins and Virginia Woolf. Perpetually ill, these spiritual seekers sought answers for the domestic discontent of the women they observed–as well as their own dissatisfaction–through the haze of jaundice, postpartum depression and bipolar disorder. Saddled with her synesthesia, a harmless condition that nonetheless seems remarkably close to insanity, Linda too remains a malcontent. A “deranged woman” for the 21st century, she distinguishes herself from her forebears by accepting the mysteries that define her with grace rather than madness. In a world where even words have unstable meaning, that conclusion seems sufficient.