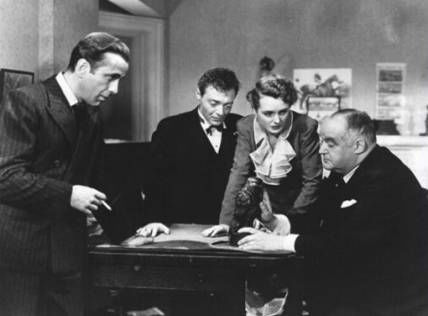 I can’t help but love Jane Greer and Barbara Stanwyck for their striking performances as femme fatales (deadly women) in the 1940’s film noirs Out of the Past and Double Indemnity.

In Out of the Past, the youthful and provocative Kathie Moffat, played by Greer, is the Black Widow who travels alone, commits murder, and ditches her male partner at a moment’s notice. Like Phyllis Dietrichson (played by Stanwyck) as the cunning villain-seductress who lures insurance agent Walter Neff into a deadly insurance fraud scheme in Double Indemnity, Kathie is a disruptive figure on-screen. She unravels masculine authority and ultimately leaves the cynical leading man castrated by his inability to outwit a woman. Scary!

Feminist film theorist Mary Ann Doane describes the femme fatale as “a symptom of male fears about feminism.” Likewise, we see that the femme fatale is representative of the “problem” woman in mid- 20th century America, whose sexual desires and professional ambitions threatened to become uncontained. Like the “emancipated” women whom many psychiatrists at the time blamed for a perceived moral decline in America, the femme fatale embodies a series of stereotypes surrounding “liberated” women: She is often shrill, anti-family, duplicitous, even psychopathic.

Kathie and Phyllis decline the role of the docile, “wholesome” housewife and instead aspire to exist independently from men, morals and family values. These women are shrewd, manipulative, gorgeous and likely culprits not just in murder but in the breakdown of the “traditional” American family.

Here are a few other highly recommended film noirs:

1. The Postman Always Rings Twice: Beware the adulteress, this film seems to suggest. Dissatisfied with her life as a waitress in her bloated, middle-aged husband’s diner, Cora Smith (Lana Turner) begins an illicit affair with drifter Frank Chambers (John Garfield). The sexually charged duo team up in a plan to murder Cora’s husband, Nick Smith (Cecil Kellaway), but become mired in a deadly game of cat and mouse when their first murder attempt fails and a prosecutor turns Cora and Frank against each other.

2. The Lady from Shanghai: “The exciting story of a reckless woman,” the caption reads for this 1947 noir about Elsa Bannister (Rita Hayworth), a stunning, elaborately coiffed woman from “the second wickedest city in the world” who tries to kill her psychologically abusive husband for his insurance money. Elsa bends the wills of men like Michael O’Hara (Orson Welles) who are utterly helpless against her.

3. The Maltese Falcon: “When a man’s partner is killed, he’s supposed to do something about it,” Sam Spade (Humphrey Bogart) says to Brigid O’Shaughnessy (Mary Astor), the treacherous woman who was responsible for the death of Miles Archer, Spade’s business partner, and who wanted to make a “sap” out of Spade. Brigid begs Spade to protect her and tells him that that she loves him, but Spade doesn’t waver. Spade’s morals may be ambiguous–he was sleeping with his partner’s wife and didn’t show remorse at the news of Archer’s death–but his commitment to professional integrity is unyielding. “If they hang you, I’ll always remember you,” he tells Brigid at the end of the film.