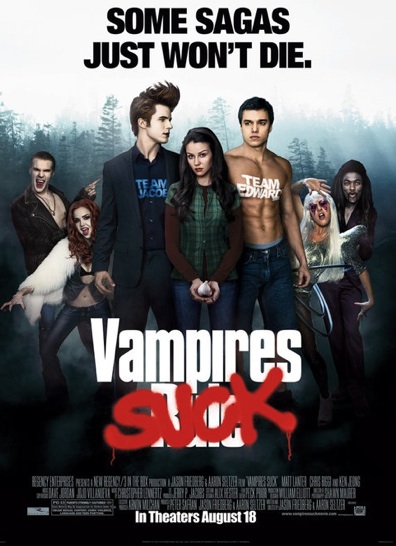 It may not be brimming with hard-edged analysis, but the new parody of the Twilight series, Vampires Suck, is certainly more satirical than sucky. This parody, written and directed by Jason Friedberg and Aaron Seltzer, has its share of what I would call “Twi-crit-light,” a nod towards serious social criticism that separates this film from the majority of parodies that are aimed primarily at making people laugh (and, thus, are more comedic than satiric).

Therefore, I was surprised at the almost entirely scathing reviews Vampires Suck received–considering that I, one who has been accused of being a “that’s-not-funny feminist,” actually found the film quite humorous. It’s true that it traded in the typical “violence is so funny” meme and was sprinkled liberally with visual puns and pop cultural references (for example, in Edward’s early semi-nude scene, his genitals are covered by a glittering disco ball). But I found most of these images to be humorous and satirical rather than inane and stale (as this round-up of various reviews suggests). Moreover, the film highlights the saga’s hypocritical obsession with pro-abstinence: Edward Sullen (a spoof version of Edward Cullen) appears as a sparkly chastity knight and Becca Crane (the parody of Bella Swan) is decked out in fishnets, a light-up bra and underwear with arrows pointing towards her genital area. As in the saga, one minute we viewers are told to keep the purity rings firmly in place, while the next moment we are encouraged to get all hot and bothered over extended petting.

The film opens with a Team Edward/Team Jacob brawl, with one girl whacking another in the head with a shovel. Mocking the team devotion of Twilighters in this and other scenes, the film trades in the obsessive fangirl stereotype in a way that is fun rather than derisive. In contrast, the mainstream media has been far more damning of Twi-hards, as documented by University of Missouri assistant professor Melissa Click in her article “Rabid”, “obsessed”, and “frenzied”: Understanding Twilight Fangirls and the Gendered Politics of Fandom.”

In Vampires Suck, Jenn Proske, the actress playing Becca, does a fine job of mimicking Bella actress Kristen Stewart’s lip biting, intensive blank stares and teen angstiness. Becca’s interactions with her father are particularly comic, highlighting the way he (and other males) treat her like a baby. In an early scene, Bella’s father carries her out to her truck in a baby carrier. Considering that Edward babies Bella throughout Twilight in a similar fashion, the satirical infantilization of her character could have become a running gag but is unfortunately dropped after the opening scenes with her father.

Mocking the saga’s pro-abstinence message, Becca is presented as sexually voracious; after first kissing Edward she demands, “Let’s go all the way.” When he brandishes his purity ring to avert her, she bites it off his finger and swallows it. In order to stop her advances, he hits her over the head with a lamp. Shortly thereafter, he says that he will never hurt her. Then he launches her through the ceiling and she lands back in the bedroom with bricks raining down on her. In this scene, Edward’s claim to be her uber-protector is shown for what it is: hypocrisy. Nice boyfriends don’t “protect” you by sabotaging your truck (as Edward does in Eclipse)–abusive ones do (as noted in Carmen Siering’s review).

The film also makes fun of Bella’s obsession with aging. She complains to Edward, “I’m 18 now. I am practically a cougar.” Making similarly humorous nods to Jacob’s shirtlessness and the latent homoeroticism of the Twilight saga, the film does not sugarcoat sexuality in the way that Stephenie Meyer’s original series does. And, at least the parody version is less heteronormative. Becca refers to Jacob as “my little gay brother;” the wolfpack gyrates flamboyantly to The Weather Girls’ hit “It’s Raining Men.” Yes, the parody uses homosexuality for comic effect, but at least this seems a step beyond the original series’ portrayal that only heterosexuals exist, a element highlighted by blogger Natalie Wilson.

The film similarly pokes fun at racial stereotypes, as when Becca tells Jacob that it “must be fun to drink and gamble all day” because he goes to school on a reservation. By mocking this tired stereotype, the movie at least nods to the fact that “life on the res” is likely something Bella (and saga author Stephenie Meyer) probably know very little about. It would have been nice if the film played up this component more; instead, it focuses on Jacob as a teen werewolf type who can’t keep his shirt on. But this is a parody, and the fact that it nods to the excessive whiteness and heteronormativity of the saga seemed to me a step in the right direction. It may not be up to par with the brilliant Edward/Buffy mash- up, but it manages to poke fun at some of the more preposterous aspects of the series–namely, that Bella is treated as an over-sexed petulant child, Edward elevated to vampire God and Jacob relegated to animalistic sidekick.

Demystifying Cyber: Cybersecurity Should Be on Everyone’s Radar, Says Congressional Staffer Hope Goins
‘The Most Vulnerable of the Vulnerable:’ The Story of Erica Sheppard, a Lifelong Victim of Abuse on Death Row
The U.S. Just Got One Step Closer To Over-the-Counter Birth Control