The Echoes of Suffrage - Ms. Magazine
Skip to content 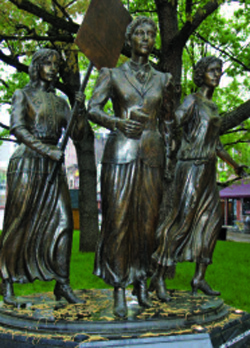 Throughout the 72 years suffragists fought for the vote, they endured ridiculous arguments against women’s rights. “Because suffrage isn’t controversial now, showing people what it was like then makes it easier for them to identify with fighting for equality issues today,” says Wanda Sobieski, an attorney and the coordinator of Tennessee’s Woman Suffrage Coalition.

The coalition was created to preserve the memory of the women who worked for suffrage in Tennessee—the state whose vote finally ratified the 19th Amendment, 90 years ago this August. The group raised funds for a memorial sculpture featuring three Tennessean suffragists, erected in Knoxville in 2006, and works to preserve and display suffragist papers and memorabilia.

One Tennessee man particularly figures in suffrage history: Harry Burn, the Tennessee General Assembly’s youngest member at 24, had planned to vote against the 19th Amendment but instead cast the tie-breaking vote in favor. Why? “I know that a mother’s advice is always safest for her boy to follow, and my mother wanted me to vote for ratification,” Burn told the assembly.

Sobieski offers a slide show to educate the public on how business interests opposed suffrage and how anti-suffrage forces used such propaganda as, “You don’t need this legislation; you’re already equal.” She points out that proponents of the Equal Rights Amendment in the 1970s faced similar claims (as well as business resistance), as do those who currently support U.S. ratification of the U.N. Convention on the Elimination of All Forms of Discrimination Against Women (CEDAW).

“The more people understand what went on with the suffrage battle,” says Sobieski, “the more likely they are to be able to dismiss the ridicule and the appeals to prejudice and fear that always come when we try to make a move toward equality.”

Above: Photograph of the memorial sculpture.

Reprinted from the Summer 2010 issue of Ms. To have this issue delivered straight to your door, join the Ms. community.