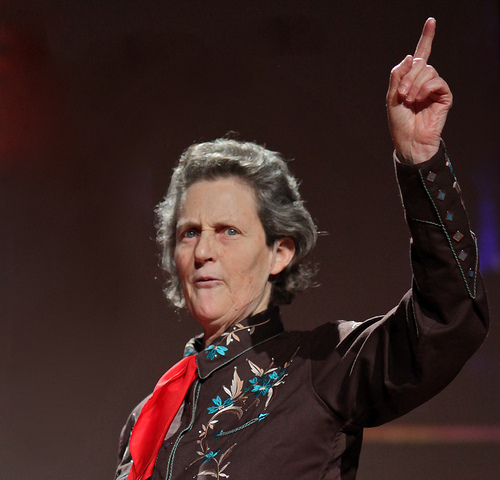 For an autistic woman who “thinks like a cow,” Temple Grandin has certainly affected millions of humans.

Last Sunday at the 62nd Emmy Awards, Temple Grandin, the made-for-HBO movie about the bestselling author and livestock expert, won five Emmys, including best lead actress (for Claire Danes playing Grandin) in a mini-series/movie. Now, more than ever, Grandin is, as BBC News dubbed her, the “most famous autistic woman on the planet.”

From psychologists to animal rights activists, nearly everyone has a reason to love Grandin, whose life  has revolutionized the study of autism and whose work as an animal behaviorist fundamentally improved the quality of life (and death) for livestock. For feminists, both the film and Grandin’s real life illuminate a number of underrepresented roles for women.

First off, the HBO movie passes the Bechdel Test, named after the author of the comic strip Dykes to Watch Out For. The test has but three rules: A film has to have at least two women with names in it, the women have to have a conversation with each other and–here’s the kicker–the conversation can’t be about men. Out of 1,448 popular movies from 1902 to the present rated by visitors to BechdelTest.com, just less than half (49.7 percent) satisfy all three criteria. (For an explanation from a previous UCLA film student about what the hell is going on in the other half of the movies, go here.)

In the film, Grandin has meaningful conversations (read: not gossip about men) with both her roommate (named Alice) and her mother (named Eustacia). Temple Grandin, therefore, passes the Bechdel Test with flying colors. Honestly, Hollywood should be embarrassed that a docu-drama about a woman with autism–a cognitive disorder that makes verbal communication challenging–was able to pass while a majority of films with highly socialized women (who are, presumably, either unnamed, mute or incapable of speaking about anything besides men) fail.

Beyond the film, the real Temple Grandin is a woman who overcame a cognitive disorder that rendered her mute for the first three and a half years of her life, a contemporary medical establishment that wanted her institutionalized and a society that required (and still requires) women to be socially attuned, sensitive and empathetic (to other humans, not just cows). Such a depiction of autistic women is long overdue: Since women (according to the CDC) constitute only 25 percent of those diagnosed with autism, the discourse surrounding the disease too often centers on men. In fact, some autism researchers, such as Simon Baron-Cohen at the University of Cambridge, even consider autism a case of “the extreme male brain.” (His reasoning hinges on the controversial notion of a sexed brain, in which male minds are better at systemizing while women’s are better at empathizing.)

New research, however, focuses on the unique demands placed on women with autism. A 2008 article in The Telegraph questions whether the lower incidence of women with autism is a result of the disease or of women’s under-diagnosis due to forced social adaptations:

Are women less likely to have autism, or are they under-diagnosed and slipping through the net because they are better than their male counterparts at adapting to social situations? The contributors to Women from Another Planet? believe the latter. Most of them were not formally diagnosed until adulthood, if at all. Most lead apparently ‘normal’ lives in that they study and have jobs and sometimes husbands and children. But all feel profoundly ‘different’; they write of the terrible, damaging strain of attempting to conform to social expectations.

Moreover, when a diagnosis is rendered, women with autism often struggle to navigate a world that requires women, more than men, to understand and respond to minute social cues. The article’s author, a journalist studying autistic women in a women-only support group, attests to this social bias:

All four women agree it is harder for a woman with autism than for a man, though they can’t explain exactly why…The women have few conventionally feminine interests. Selina stacks shelves in the health and beauty aisles at Sainsbury’s, but she has no particular interest in those products. All seem to lack that instinctive understanding of social behaviour that to most women comes as naturally as breathing.

While autism research and treatment has come a long way since the 1940s (when it first emerged as a distinct disorder in the medical community), diagnosis and specialized treatment for women still has a long way to go. But, thanks to Temple Grandin (and with kudos to HBO), millions of Americans now know that this disorder can also be a gift that enables one to see the world in a unique and empowering way.