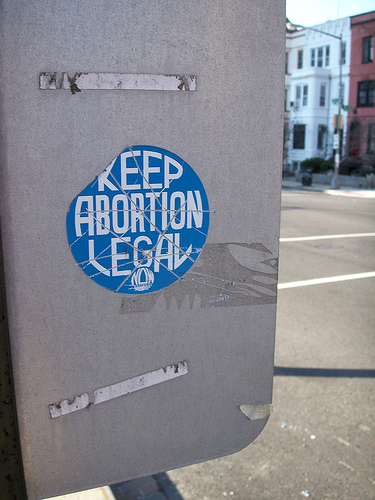 In Cairns, Queensland, a 20-year-old woman is being prosecuted for intending to terminate her pregnancy. Tegan Leach and her partner, Sergie Brennan, 22, are expected to stand trial on October 12 for importing the abortion drugs RU486 and Misoprostol from Ukraine in order to terminate Leach’s pregnancy (in December 2008). While police did not prove the toxicity of the drugs, the empty packets supposedly proved an intent to miscarry. In the last 25 years, Leach is the first woman to be charged with intent of abortion in Australia.

The last charge of unlawful abortion in the country was in 1986,  R v Bayliss and Cullen. Dr. Peter Bayliss and Dr. Dawn Cullen were charged with procuring illegal abortions after the clinic they worked at was raided. They were found not guilty.

In the latest case, Leach could spend up to seven years in jail if convicted, while Brennan would serve a lesser charge of up to three years for supplying the drugs. They say they were unaware that they had broken any laws.

Under Australian law, it is a crime to have an abortion, perform one or have the intent to abort, although it is not a crime in cases when a woman’s health is in danger. Until now, however, the government has turned a blind eye to the abortion law.

Pro-choice groups in Queensland are speaking out against the trial and the effects it could have on abortion legislation. Kathy Newnam, spokeswoman for Pro-Choice Action Collective told The Australian:

This case threatens to set a dangerous new precedent on the abortions laws, and supporters of abortion rights are determined to build a campaign that the Bligh government [for the state of Queensland] cannot ignore.

Even anti-abortion groups are not supporting Leach’s trial. Alan Barker of Cherish Life Queensland stated that this prosecution was a victimization of women who had had an abortion.

Women’s groups globally are rallying around Leach and Brennan in order to get the charges dropped. An online petition from Radical Women of Australia and Radical Women of the United States supporting the couple is asking for signatures by October 1. On October 9, Radical Women Australia will protest at the Parliament House in Melbourne to stop the abortion prosecution and link it to the other inequalities that women are facing. Visit Radical Women for more information and how you can participate.