What If You Refuse to Be Seduced by Violence? - Ms. Magazine
Skip to content 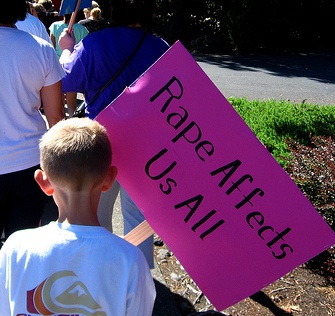 With great homage to the brilliant bell hooks, I offer these thoughts on how we might actively refuse to be seduced by violence. They come from a speech I gave a few years ago at the campus where I teach and were inspired by my concern over the violent messages in Stephenie Meyer’s Twilight saga that are seducing so many readers around the world.

The rape, sexual assault and interpersonal violence that plague our culture are by-products of our patriarchal, militarized and commodified world. Yet such violence could not continue if we did not allow it.

We like to act as if violence happens out there, beyond our control. Yet, in reality, it’s a part of most of our lives. For some of us, it happens regularly in our homes; for all of us, it happens in our neighborhoods, our schools, our cities, our nation, our world. While U.S. culture convinces us that we are powerless to change this violence, we are not. In fact, a key hope for change lies within our daily acts of resistance to violence.

One place we can begin to change our immersion in and attraction to violence is in our response to popular culture. We can start by examining how intertwined violence and sexuality are in contemporary society.

Currently, an entire army of 10- to 14- to, yes, even 40-year-olds are immersed in the Twilight book series, which romanticizes violent masculinity and presents sexual assault as proof of love. Vampire and werewolf legends are, of course, dripping with thinly veiled references to rape, violent sexuality and sexually motivated murder. These characters also embody violent masculinity. Yet, the messages about sexuality and violence that these rabidly popular books contain are far from unique–the Hostel film series and other such horror films repeatedly make violence seem sexy and present violent sex as an extreme turn-on.

When youth are encouraged to desire werewolves who sexually assault them (via books like Twilight), teens are encouraged by Eminem to think homicidal misogyny is cool, and those of us who watch television are so inundated with violent sexuality that we become immune to it, we should not be shocked that our culture is one of extreme violence.

As largely apathetic bystanders to this violence, we must realize that we are, in fact, not bystanders but accomplices. One place to begin the process of eradicating violence, therefore, is within our own desires.

If men are turned on by power, control and domination, they are perpetuating violence.

If we as parents allow our children to achieve addictive adrenaline rushes by playing Grand Theft Auto and other such games that glorify murder and rape, we are perpetuating violence.

If we as citizens accept war as an answer to world problems, we are perpetuating violence.

If we, as bell hooks suggests, fail to refuse to be seduced by violence, we are culpable for all the violence that occurs in our culture.

A first step: We can vow to be seduced by violence no more.