Sexualizing Young Girls Is Nothing to Cheer About - Ms. Magazine
Skip to content 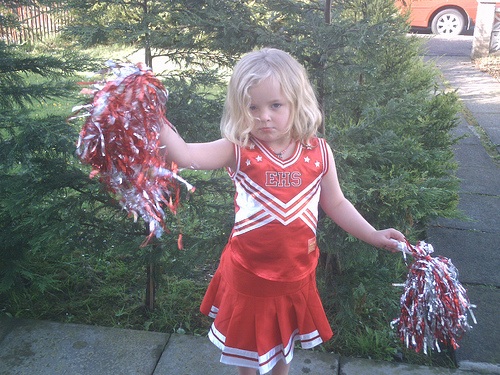 Last week’s MSNBC news story about the Michigan six-year-old booted off the cheerleading squad after her mom objected to a risque routine got me thinking. This has been a strange season for news stories concerning the sexualization of young girls. Back in April, the UK’s Primark department store was taken to task for selling padded bikini tops for toddlers; in August, The Wall Street Journal reported on the appearance Baby Gap “skinny jeans” for, well, babies. I find this all a little disturbing because, as the WSJ article pointed out, parents dressing their children in these clothes have a “mini-me mentality.” They seem to forget children aren’t just miniature adults. I think that might be what prompted little Kennedy Tesch’s mom to speak out.

As a former cheerleader and cheerleading coach, Jennifer Tesch is familiar with the sport. However, when her six-year-old came home spouting, “Our backs ache, our skirts are too tight, we shake our booties from left to right!” Jennifer said she “was in shock” and didn’t feel the cheer was appropriate for such young girls. Appearing on the Today Show, Tesch explained that she voiced her concerns first to the team manager and then all the way up to the team’s governing board. Ultimately, she was told Kennedy could sit out the cheer, but was also told she and her husband Duane were “perverse” for seeing anything wrong with it. Tesch said then she “got mad” and took her story to the local media.

At this point the issue becomes less about Kennedy and more about the reactions of the so-called “grownups” involved, because as soon as the media was involved the entire situation resorted to name-calling and rendering judgments on whose values were going to prevail. In the end, Kennedy was kicked off the squad, while the other girls are, presumably, still doing their booty-based cheer. I’m left wondering how some adults can see this as “just fun and games” and others recognize it as symptomatic of the sexualization of young girls in our society.

We live in a media-saturated society, one in which images of ever-younger girls as sexual beings is pervasive–so common that some people don’t recognize them anymore. But there are parents who do see what is going on, and they try to protect their children when they can. Even the most well-meaning parents can’t always prevent their children from seeing those images; what they can do is refrain from reinforcing them. Maybe that is what Jennifer Tesch was trying to do. She decided to take a stand against one more intrusion into her daughter’s childhood.

Other parents weren’t convinced. Obviously the coach, who said the cheer had been around “for 20 years,” felt differently. But certainly no six-year-old would come up with a cheer like that on her own. And it’s when adults impose their own sexuality on children that things start to get problematic.

According to the Report of the American Psychological Association Task force on the Sexualization of Young Girls, “when children are imbued with adult sexuality, it is often imposed upon them rather than chosen by them.” Popping your toddler into adult-styled clothing or teaching a six-year-old to shake her booty may be amusing, but it is also an imposition of adult sexuality.

I am not suggesting that children aren’t sexual beings, and I’ve recently encouraged offering sexual education at much earlier ages, but that is far different than imposing adult sexuality. As M. Gigi Durham, author of The Lolita Effect: The Media Sexualization of Young Girls and What We Can Do About It, pointed out in a 2008 Salon interview, there are some things associated with the act of sex itself, or with sex work, and those things aren’t appropriate for children. Most people were outraged when UK retailer Tesco began selling a toy pole-dancing kit. Is that much different than putting your child in fishnet stockings and stilettos and sending her out on Halloween, or suggesting she stand in front of bleachers full of adults and do a bump-and-grind in a short skirt?

Doing research on the lives of young girls and the ways in which the media impacts them makes me hyper-aware of how these incidents demonstrate the increasing pressure on younger and younger girls to become too sexual too soon. Each incident may seem insignificant, but added together they can result in the outcomes noted in the APA report:

Sexualization has negative effects in a variety of domains, including cognitive functioning, physical and mental health, sexuality and attitudes and beliefs.

Little girls like Kennedy need more advocates like her mom to help them grow up knowing they are more than the sum of their body parts. That would be something we could all cheer for.

Photo from Flickr user jimmymacdonald, under license from Creative Commons 2.0