Still Much Ado About Craigslist - Ms. Magazine
Skip to content 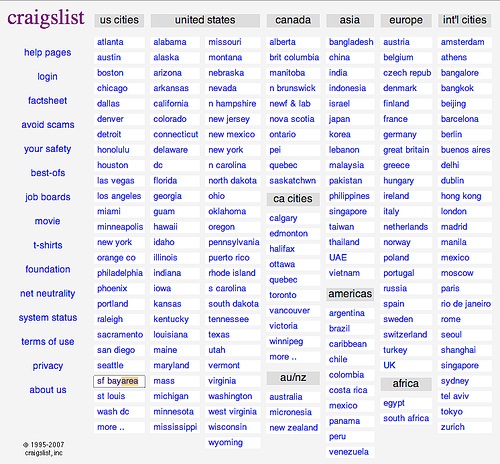 Though Craigslist’s Adult Services section is offline for good, the debate about its role in trafficking continues. Most recently, Michelle Goldberg weighed in on The Daily Beast with an article that uncritically embraces claims about what the closure of Adult Services will do for underage girls. In doing so, she inadvertently confirms many of the points made by those criticizing the anti-Craigslist campaign.

One of Goldberg’s first quotes comes from Malika Saada Saar, founder of The Rebecca Project for Human Rights, who says “so many of the girls in the juvenile justice system were there only because of issues of sexual victimization,” immediately pointing to some of the biggest problems for victimized girls and women—their lack of resources and practical support, as well as their criminal status. (Saar is referring not only to prostitution but also to truancy and arrests for fleeing homes where sexual abuse occurs.) It’s unclear why law enforcement, the courts and jail are our best options for dealing with disadvantaged teens, but Saar quickly shifts the emphasis off of the legal system itself and onto Craigslist.

Melissa Gira Grant was one of many advocates for redirecting the energy focused on closing Craigslist towards alleviating those aforementioned institutional problems. In an article for Alternet, she criticized the Craigslist attack as “criminally shortsighted,” adding that health care discrimination, police abuse and criminal convictions all contribute to the suffering and lack of options for individuals within the sex industry, regardless of their gender and age. Why, wonders Gira Grant, are the attorneys general targeting an “intermediary advertising website” instead of working to create change “within the criminal and legal systems in which they have power?”

Goldberg’s article goes on to promote theories unsupported by any studies. Ken Franzblau of Equality Now says “We believe [Craigslist] actually increased the number of women being put into prostitution,” but no proof of such a phenomenon exists. Franzblau further speculates that “an awful lot of casual purchasers of sex are not going to know where to find it anymore and are just not going to bother.” Again, there are absolutely no numbers to support such a wildly optimistic claim, but there are plenty of thriving sex-selling websites that testify to enduring demand.

It’s hard to believe that purchasers of sex will be deterred by a few moments of googling for Craigslist alternatives, or that pimps who had no qualms about lying to, raping, kidnapping and abusing teenagers will suddenly be reformed because Adult Services is gone. Former trafficking victim Jill Brenneman wrote that when calls weren’t coming in, she was forced to work the street. As Gira Grant states, “There is simply no evidence that limiting the venues in which sex is sold improves public health and welfare for anyone.” Indeed, the profound lack of concrete evidence surrounding this highly emotional topic is one of its defining characteristics.

Goldberg’s piece concludes with another quote from Saar, who calls the concerns that closing Adult Services will drive trafficking further underground “bizarre.” But fears that criminals will become more covert instead of reformed are well-founded, alcohol prohibition being the most notorious example and our current failed drug war being another. When Saar says those protestations are akin to “saying it’s better for a child to be raped on our street, because at least we can identify the rapist, instead of around the corner,” she almost seems to admit that her solution is simply changing the location, not the crime.

No one participating in the Craigslist conversation wants another human being to be raped or beaten or otherwise abused. If we take on faith the good intentions and basic human decency of all parties involved, then it’s completely counterproductive to misrepresent some participants as merely “prudish” while others are assumed to be so callous as to value a company’s profits over the suffering of others. This debate is the result of critical differences of opinion in terms of how the lives of those in the sex industry can be improved, and it’s an important debate to be had. But its continuation will be most successful if undertaken with more cooperation and less acrimony, as well as more research and fewer emotional appeals.