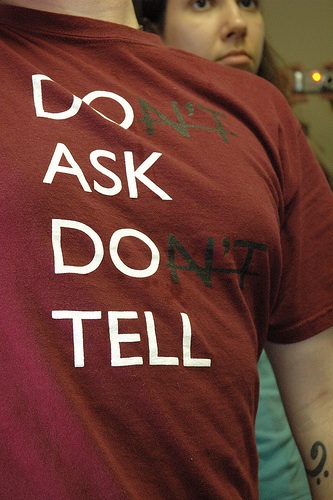 Gay rights groups have been celebrating the decision, but still relaying caution to LGBTQ members of the military. The executive director of Servicemembers United, Alexander Nicholson, cheers Judge Phillips’ ruling (which follows her decision that DADT is unconstitutional after a July trial in Riverside, Calif.):

This order from Judge Phillips is another historic and courageous step in the right direction–a step that Congress has been noticeably slow in taking.

DADT has been in effect for 17 years, and more than 12,500 people have been kicked out of the military under the law, which bans openly gay and lesbian members from serving. If servicemembers come out or are caught (even in their own homes), they can be dismissed. A recent repeal attempt, attached to the 2011 National Defense Authorization Act, needed 60 votes in the U.S. Senate to successfully strike down DADT but was blocked by Republicans in a 56-43 vote in late September. Twenty-one senators–all Democrats except for Bernie Sanders (I-Vt.)–signed a letter urging Atty. Gen. Eric Holder not to appeal Judge Phillips’ ruling that DADT is unconstitutional. Obviously the Obama administration was not moved.