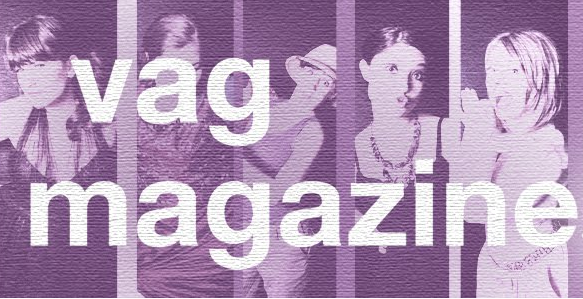 The first episode of Vag Magazine, a six-part web series, has debuted online–and even though we’re in the line of comedic fire, we’re grinning, if not yet guffawing. The show was created by some funny women from the Upright Citizen’s Brigade, an improv and sketch-comedy group where famous peeps like Amy Poehler got their start.

The first episode opens with a Vag staff meeting. The Vag founders have just bought out a fashion magazine–with funds raised from selling reusable menstrual pads on Etsy–called Gemma. Meghan, the only former Gemma staffer who retained her job after the takeover, arrives at the Vag office confused. When she asks what happened to the fashion mag, Vag staffer Fennel says, “Like all patriarchal regimes will, fashion magazine Gemma has fallen.” (The Gemma name is either purposefully or accidentally amusing, considering that Gemma was the name of a decidedly anti-patriarchal magazine in the ’70s dedicated to lesbians with disabilities.)

All the characters are intentional caricatures (the gonzo cultural journalist, the roller derby grrrrl), and the creators characterize their parody target as a “hipster, third-wave feminist magazine.” But, fortunately, the jokes don’t cut as much as tickle. If I were to pinpoint the one magazine the show might particularly be critiquing, it’s Bust (rather than, say, Bitch or Ms.). I’m reminded of a brouhaha last year in which author and Feministing founder Jessica Valenti mentioned that she didn’t identify strongly with Bust in a New York Times article, which then Bust quoted while explaining why it’s indeed feminist. And I’m reminded of a surge of articles published in recent weeks questioning what feminism actually means: who can call themselves a feminist, whether or not we need feminism anymore and a confusion over whether feminism is a vehicle for change on a personal level or as a class. (Can’t we multitask and make feminism about both personal and class liberation at the same time?)

Vag Magazine made me think about feminism even as it parodies some aspects of it–and that makes it smart and funny. What do you think of Vag Magazine? Useful critique? A mean girls’ joke? A characterization of how there is no one feminist movement? All or none of the above?