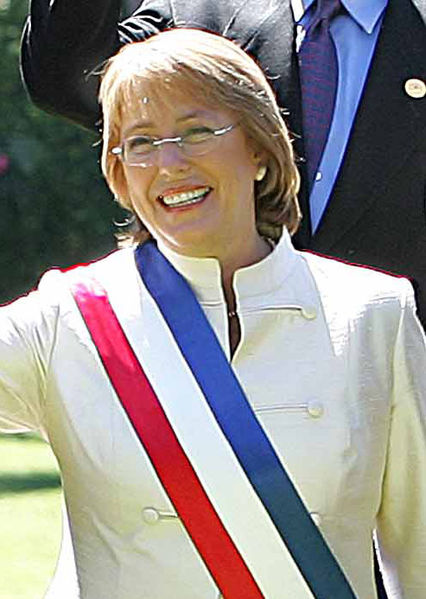 Bachelet has spoken on various issues in recent weeks, including the unique burdens women face in the global recession, sexual violence and women’s political involvement. Her overfull plate reflects in part the lag that women’s movements have suffered while operating for years without cementing a comprehensive policy agenda. (Note the halting progress of the Convention on the Elimination of All Forms of Discrimination Against Women, CEDAW.)

Bachelet is the anti-token woman appointee, having spent her life proving her chops as a military strategist, physician, dissident, reproductive rights activist and, eventually, Chile’s first female chief executive. Yet Bachelet puts a high premium on bringing a woman’s presence to government. Responding to a question about her efforts in Chile to achieve gender parity in government appointments, Bachelet told the BBC:

Many times, in many societies, women are invisible even though they are there doing a hard job every day….. [In] the end, you can have a woman president, but it’s more important… that everywhere you can see great women doing a great job, that they can be as efficient as men, and that they can also introduce a lot of quality, a lot of human perspective that is very important, also, in politics.

The underlying mission of the consolidated, better-funded women’s agency, will be to set the goalpost for action well beyond mere visibility. UN Women will start off with a $10 million grant initiative to deal with violence against women and girls. The supported initiatives range from protecting women from acid attacks in Nepal to curbing the exploitation of migrant women workers in the Middle East.

Still, whatever help arrives will primarily underscore how much is left to be done–a vast social deficit outlined in the 2010 UN World’s Women report. The Guardian reports:

Unfortunately, the global needs still outweigh the monies available. Falling drastically short of the current global demand to help women, the UN Trust Fund has only been able to meet 3 percent of the global needs of women’s organizations who petitioned the agency through 1,643 grant applications.

The 97 percent of demands that go unanswered add up to a deep structural inequity in the international human rights regime. UN Women’s most important task may simply be coordinating the global effort to confront this aggregate crisis.

One challenge Bachelet may want to prioritize now is helping the women of Haiti, whom she described in her introductory speech as an example of …

… how important it was to listen directly to the women who were affected and who always know what it is that they need to rebuild the country, but who, too often, are not at the tables where these decisions get made.

Just in time, the advocacy organization MADRE has filed a petition with the Inter-American Commission on Human Rights on behalf of women in chaotic post-earthquake refugee camps. The petition documents the testimonies of women who have survived a rash of sexual violence, which was often ignored or neglected by international aid institutions.

Against all odds, those women have spoken. UN Women should hear them loud and clear.