The Good News: Madea’s Not a Colored Girl - Ms. Magazine
Skip to content 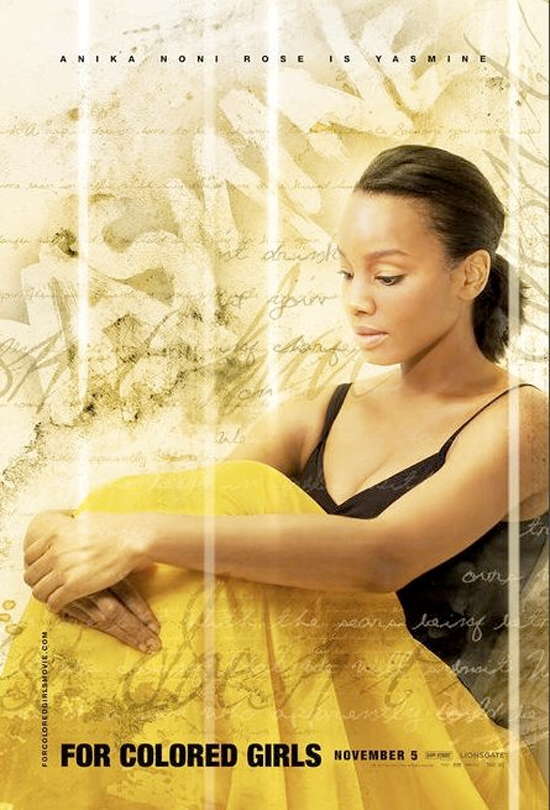 The bad news is you can’t escape the long arm of Madea in the new film For Colored Girls. Tyler Perry’s Madea, whose righteous indignation and compulsive moralizing are warped with tired tropes of Judeo-Christianism, provides the backdrop for interpreting the characters in his film version of the Ntozake Shange “choreopoem”. Phylicia Rashad’s character Gilda (a creation of Perry, not Shange) embodies Madea as the matriarch and griot who looks out for the trouble women in her building. She is the incarnation of the Black female elder, minus the coonery and drag of Madea. Even with the stellar performances of A-list actresses like Rashad, the film confirmed expectations of poor narrative translation and cinematic quality.

I had the privilege to see For Colored Girls among a predominantly Black female audience at a pre-screening in Seattle hosted by the Real Colored Girls Collective, Langston Hughes African American Film Festival, Seattle University and other community organizations.  An audience of more than 500 stood in line for over an hour on one of the wettest days of the year to see a film that is already generating Oscar buzz. The screening was followed by a lively community dialogue that included the voices of Black feminists such as Dr. Maxinne Mimms (pictured below), Real Colored Girls C. Davida Ingram and Christa Bell, blogger Sable Verity and spoken word poet Storme Webber.

According to Deadline, For Colored Girls was third among the top ten grossing films in North America on its opening day, Friday, and is expected to gross $21 million its opening weekend. Black women in particular are going out in droves to support For Colored Girls, since it’s the first film since Precious: Based on the Novel “Push” by Sapphire that centers on the lives of Black women and our communities.

Perry took creative license with his interpretation of Shange’s play, much to the chagrin of my initial hope that if he remained true to the play it would save the film. He not only disconnected the poetry from specific characters (Janet Jackson’s Jo is actually Shange’s Lady in Blue–so what’s up with the red?), but his characterizations of Black women were hyperbolic remnants of played-out archetypes. They fail to breathe life into Shange’s self-determined colored girls.

For Colored Girls must be understood in its connection to Precious and the real-life story of Tyler Perry’s childhood experiences of sexual and physical violence. In the weeks preceding its release, Oprah Winfrey devoted three episodes of her show to issues salient to the film–the “down-low,” Tyler Perry’s story of abuse and 200 men who were molested. While it was transformative for Oprah to use Perry as a catalyst to discuss sexual shame and abuse for men, using him also connects these issues to representations of Black sexuality and to the Black women of For Colored Girls. It is as if this film is a way for Perry (and his audience) to process legacies of sexual violence through the continued victimization of Black women and our sexualities. ‘Victim’ is not the appropriate characterization of Shange’s colored girls.

The themes of suffering, lack and the damnation of sexuality for Black women are rampant in For Colored Girls in a way not embodied in Shange’s original play. Juanita, Shange’s Lady in Green (played here by Loretta Devine), personified the neck-snapping Sapphire archetype with the trifling player boyfriend, while Yasmine/Lady in Yellow (Anika Noni Rose) embodied the beauty and joy of a dancer whose light faded as the result of rape. Two of the most damaged characters in the film are Crystal (Lady in Brown), played by Kimberly Elise, and Tangie (Lady in Orange), played by Thandie Newton. They represent historical legacies of trauma vis-à-vis Black men. Kerry Washington’s Kelly (Lady in Blue) seemingly has it all–a modest lifestyle as a social welfare case manager with a detective husband (Hill Harper). Yet, her inability to conceive, as the result of a sexually-transmitted disease contracted in her past, sends the message that women pay a price for the sexual indiscretions of youth. This is also crystalized through the character of Nyla (Lady in Purple), played by newcomer Tessa Thompson. She celebrates her first sexual experiences among her girlfriends only to have to endure the pain of a back-alley abortion by a slovenly, hot-mess of a drunken abortionist (another creation of Perry) played by Macy Gray.

Tangie had the potential to be the most complicated character in the film. She is the tragic mulatta whose biraciality, wanton sexuality and condemnation by her hyper-religious black mother Alice/Lady in White (played by Whoopi Goldberg), produced a troubled soul determined to combat the horrors of her childhood molestation by her white father. But her open sexuality is not empowering within this context. I wanted to love her sexual freedom, but Perry’s insistent moralizing forced me to interpret her liberatory Black female sexuality as a byproduct of abuse.

Perry’s moralizing is also evident in his manufacturing of the ‘down-low’ brotha, Carl (Jo’s husband), played by Omari Hardwick. Perry’s license with Shange’s original work was appalling. Lady in Blue’s description of her man as “mean/low-down/triflin” is turned into Jo’s confession of her husband as “low-down/down-low” to legitimate Perry’s characterization of him as a Black man who enjoys having sex with men. By conjuring a fear of Black male homosexuality, Perry further personifies gay male sexuality as something to be feared, loathed and ultimately disdained, especially since Jo implies that she contracted HIV as a result of his homosexual trysts. Given Perry’s admission on Oprah of being conflicted about his own sexuality, this narrative seems to be a way for him to resolve his own moral and sexual ambiguity. This kind of creative license has damaging effects on representations of Black sexuality, and unnecessarily furthers an anti-gay politic.

While I believe wholly in artistic freedom, I am also concerned about the economies of storytelling: who’s telling the story, what the content of the narrative is and how the content inhibits a politic of freedom. This film may be Perry’s attempt to get the societal “embrace” (and Hollywood legitimation) that he needs to heal from a history of sexual violence, but this is what makes the film inauthentic for Black women. Instead of interpreting Shange’s work as an epic of self-determination, he uses the backs of her colored girls as a bridge to his own catharsis. When white folks appropriate our stories, we call them culture vultures. So what is Tyler Perry to Black women?