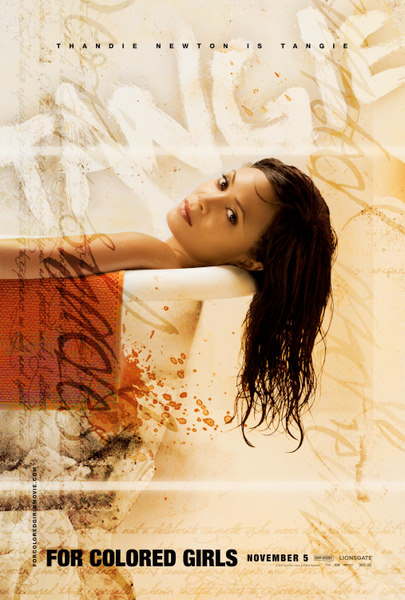 We have had such a tremendous interest among our bloggers in Tyler Perry’s For Colored Girls that we’ve posted a number of their analyses, both before and after the film’s premiere this past Friday. It’s not hard to understand why the hoopla: Ntozake Shange’s beloved For Colored Girls, Who Have Considered Suicide When the Rainbow is Enuf, is a touchstone in African American women’s art–let alone in the hearts and minds of African American women. Its cinematic representation is more than a movie; it’s a cultural event of deeper import. Would a man–let alone a blockbuster moviemaker with a heavy-handed comedic/moralistic style–do it justice?

Here are some of the answers our bloggers have given:

What is most damaging about [Perry’s] characterizations is that they are coming not from the lived experiences of Black women, but from the mediated gaze of a Black man. … Classic Black feminist texts adapted from the perspective of a man is problematic.

Perry’s churchified high camp is no match for a poet like Shange who can pen the line: ‘& if jesus cdnt play a horn like [archie] shepp/ waznt no need for colored folks to bear no cross at all.

Whether [Perry] gets the presentation of this story wrong or right, we must still be adamant in our questioning of who in this culture is allowed, through access and privilege, to tell the stories and control the representations of black women.

Instead of interpreting Shange’s work as an epic of self-determination, [Perry] uses the backs of [Shange’s] colored girls as a bridge to his own catharsis.

And Linda Villarosa, though admittedly “not an apologist” for men, nonetheless takes their side here:

Men don’t get a fair shake in the movie; they are bashed and trashed from start to finish.

Finally, Fitts, Bell and Ebony Utley–who previously wondered on the Ms. Blog, “Can’t Women Do Better Than Tyler Perry?”–put together a lively videoblog discussion about the film in a three-way Skype conversation:

Now what do you think? We’d love to read your comments …