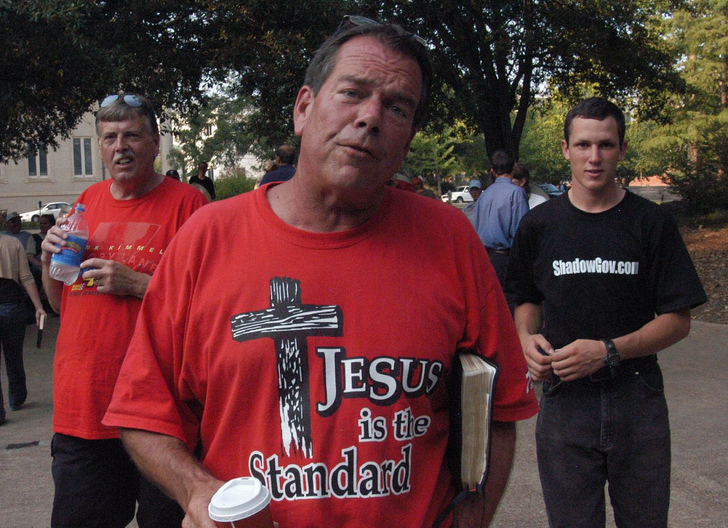 Anti-abortion leader and head of Operation Rescue/Operation Save America Philip “Flip” Benham was convicted today of “criminal stalking with intent to cause emotional distress and disruption of domestic tranquility” for stalking a doctor with WANTED posters at his home. Benham had targeted several North Carolina doctors who work at abortion clinics in Charlotte, using old-West-style WANTED posters that featured the doctors’ home and office addresses and their photographs. (Such posters have been ruled to be illegal threats by federal courts under the Freedom of Access to Clinic Entrances Act [FACE].) Benham and his followers stalked doctors and distributed the posters throughout their neighborhoods, and even at their homes. The conviction was secured thanks to a new state law that bans picketing in residential areas.

Benham was sentenced to two years probation. The judge also ordered that Benham and his associates must now stay 300 feet or more from wherever the doctor is working, and 1,000 feet from the doctor’s residence. Despite today’s conviction, the Feminist Majority Foundation, which tracks anti-abortion extremists and works to stop violence against reproductive health care providers, is calling for

these WANTED posters [to] be prosecuted by federal and state law enforcement authorities as violations of FACE and federal and state anti-stalking laws [which carry stiffer penalties than the residential picketing law he was convicted under].

Katherine Spillar, executive vice president of the Feminist Majority Foundation and an expert on anti-abortion terrorism (as well as executive editor of Ms.), says,

These WANTED posters are communicating a threat to these abortion providers; doctors featured on WANTED posers in the past have become targets of anti-abortion extremists willing to kill, including most recently Dr. George Tiller.

Top: Benham at a 2006 Operation Save America protest. Photo courtesy of marklyon // CC 2.0.

For a groundbreaking investigation into Dr. Tiller’s murder, read “Not a Lone Wolf” in Ms. magazine.