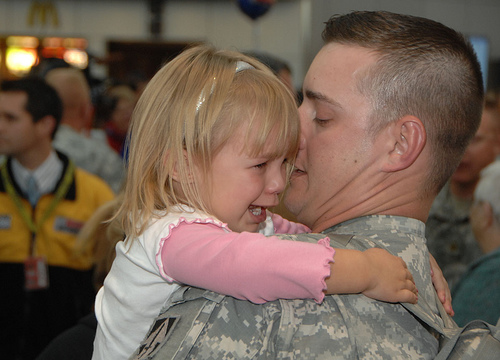 For military families, the war front and the home front are, increasingly, one and the same. The trauma of war invades the lives of men, women and children every day, whether they’re active duty, veterans or partners and children of service members.

The very absence of a loved one because of military service can cripple families. According to a recent study that surveyed servicemembers’ children, ages 3 to 8, those kids separated from an active-duty parent were significantly more likely than others to seek treatment for mental health issues such as “mood, anxiety and adjustment disorders.” While military families sought more mental health help services, they had fewer visits for other medical issues–suggesting that separated families may have less capacity to cope with the whole array of health problems that emerge.

For a woman who remains at home while her partner is deployed, the vulnerable mental health of her kids is part of a universe of challenges. Columbia University’s National Center for Children in Poverty (NCCP) reports in a research brief that the mental health of the parent and the child are critically linked. The strain of war on relationships could send families on a downward emotional spiral:

According to the Veteran’s Administration, partners of the veterans with PTSD reported lower levels of happiness [and] less satisfaction in their lives, with about half reporting having felt ‘on the verge of a nervous breakdown.’

It’s no surprise that exposure to war’s brutality might foster a volatile or abusive climate at home. Even more troubling is how these problems slip through cracks in the social-service net for military families. The NCCP notes, “a severe shortage of military and civilian mental health providers with expertise working with military families who are available to serve children and youth in military families.” Even as the needs of Iraq and Afghanistan veterans have swollen in recent years, there have been dips in the number of active-duty mental health professionals in the Army, Air Force and Navy.

Since care must be culturally competent to reach the broadest swath of impacted families, these gaps may be intensified by other demographic barriers: Children of active duty military families are disproportionately Black or Native American, according to NCCP, and “over one-third of new active duty enlistees come from communities where the median household incomes are $42,039 or less per year (considered low-income).”

That so many women return from war only to wind up on the street is another painful reminder that, for countless servicewomen and women in military households, the battleground at home extends far wider and lasts much longer than the fight on the frontlines. There’s no such thing as victory on this front–just a long-neglected obligation on the part of government and communities to help the wounded finally heal. Let’s not forget that on Veteran’s Day.

Photo from Flickr user The U.S. Army under Creative Commons 2.0.