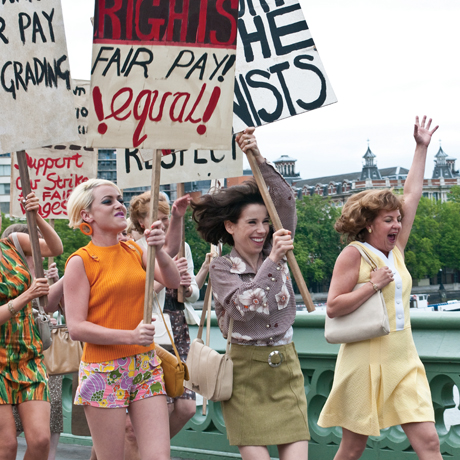 It’s not often that a blatantly feminist film is released to a wide audience. There are many films with characters who posses feminist qualities, but only a handful about the feminist movement itself in recent years. Actually, Iron Jawed Angels (released on HBO) and North Country are the only ones that come to mind.

Made in Dagenham, out Nov. 19 in New York and Los Angeles, is the latest retelling of feminist herstory. The film, directed by Nigel Cole (Calendar Girls), focuses on the little-known story of the 1968 strike for equal pay at the Ford Motor factory in Dagenham, England. Sally Hawkins (who is already garnering Oscar buzz) stars as Rita O’Grady, leader of the 187 women who sewed vehicle interiors but were branded “unskilled” and thus paid less than men. Shot in bright, uplifting colors and lighting, the film conveys the women’s optimistic view as they fought for equal pay while also taking care of their families. The film still shows the grim working conditions and obstacles the women had to overcome, but is filled with optimism and humor.

While Rita starts out as a reserved and ordinary working mom, with the encouragement of union representative Albert (played by Bob Hoskins) she soon surprises everyone by speaking her mind to the Ford and union bigwigs, organizes the women and speaks out to the press as their spokeswoman. She demands that Ford brand the machinists  skilled workers and give them equal pay. When the union wavers in its backing of the women, she delivers a heartfelt speech to regain its support. Norma Rae, anyone?

Efforts of the strike, which caused the entire 55,000-employee plant to cease production, caught the attention of Secretary of State for Employment and Productivity Barbara Castle (Miranda Richardson) and led to the U.K. Equal Pay Act of 1970 that made it illegal to pay employees differently because of gender. While the U.S. had already passed its Equal Pay Act in 1963, the Ford strike was followed by equal pay laws in France and Ireland.

Hawkins emphasized the importance of what the women in Dagenham fought for:

Sadly, equality is very much still a fight we’re fighting. In the film industry–again–it’s men calling the shots and it always has been. It frustrates me enormously. The message of the film is to keep pushing yourself, and keep challenging yourself…As the women of Dagenham showed us, it’s so important to fight for what you believe is right, even when it’s scary.

The film has already met with controversy over its “R” rating for “language and brief sexuality.” Yes, the F-bomb is thrown around more than once, and there is a brief car scene that is sexual in nature, but no nudity. Hawkins’ character even apologizes later for using the F word. It’s a shame that the film didn’t earn a PG-13, because this is a movie that families should see, especially those with daughters. It’s important that the story of how we’ve gotten as far as we’ve gotten be told, and Made in Dagenham is one of the few films telling it.

Above: Sally Hawkins, middle, leads the machinists in a protest for equal pay. Photo courtesy of Sony Pictures Classics.

Join the fight for fair pay in the U.S.: