When Isabel Met Kavita and Talked About Militarism - Ms. Magazine
Skip to content 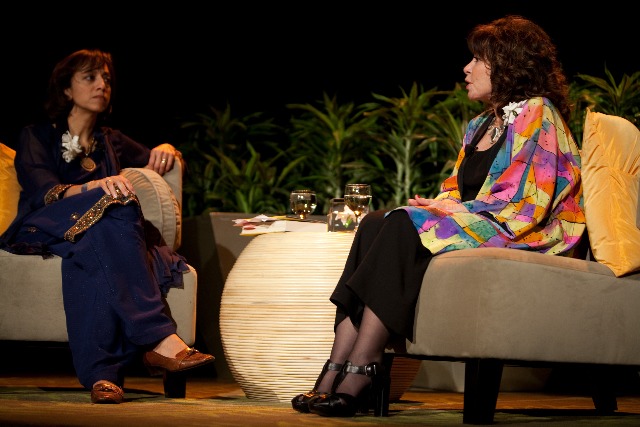 Last week I had the pleasure of attending the Global Fund for Women’s event “Resist, Reclaim, Restore,” which featured a conversation between Kavita Ramdas, the former president and CEO of the GFW, and Chilean-American author Isabel Allende. The GFW’s progressive approach to empowering women attracted a diverse set of women who gathered that evening in San Francisco—well-heeled donors mixed with young feminists in frayed jeans, each eager to hear Ramdas and Allende speak about the growing problem of militarism, its effects on women’s rights and how women can be active leaders in peace-building.

As I waited for the talk to begin, the work of the GFW—a nonprofit grantmaking foundation which invests in organizations led by women worldwide—projected across large screens: funding for women’s health in Uzbekistan and for girls’ education in Afghanistan and Zimbabwe. But tonight’s event was about their newest campaign, the Women Dismantling Militarism Initiative, which calls attention to the pervasive nature that militarism has on women’s rights both in the United States and abroad. It’s a problem that we don’t talk about enough and, as GFW’s board chair Leila Hessini pointed out, it affects our mindset down to the most minute details–from the clothes we wear to the language we use (“bullet points”) to the values that infuse our political debate. Militarism has a disproportionate effect on women in particular: Women refugees account for 70-80 percent of the world’s internally displaced persons and women’s bodies are often the battlegrounds on which war is waged. And that’s what Ramdas and Allende were there to speak about, to shift the discourse from the violence of militarism to the prospect of women-led peace-building. As Allende said, “Women have nothing to lose; we must challenge militarism.”

Ramdas and Allende spoke about the many women they had met throughout the world, women who Ramdas described as “indestructible,” who had been victimized by wars, internal violence and U.S. military intervention. Both spoke from a place of experience—Ramdas recounted working in an orphanage filled with unwanted girls in her native India, while Allende spoke of her experiences in Chile after the U.S.-funded coup d’etat ousted her cousin Salvador Allende from the presidency. Allende, in particular, had witnessed first-hand the devastating effects of militarism under the brutal dictatorship of Augusto Pinochet that followed the coup.

Both women stressed the relationship between nationalism and militarism, which Allende said “scares her stiff.” And certainly they made a compelling connection between U.S. exceptionalism (a wedge issue following the election of President Obama and throughout the mid-term elections) and the culture of violence.  They encouraged the audience, composed largely of American women, to be active, loud voices of feminism—reminding us that our pursuit of gender parity should not be contained within U.S. borders.

But what was most amazing about Ramdas and Allende was their incredible optimism–an attitude that has remained resolute despite the cruelty each has witnessed.  They reminded the audience that women are crucial to disarming militarism, and when Ramdas posed the question, “Does our alleged lack of power work in our favor?” Allende responded with a clarion call, especially pointed at young  feminists:

Women are powerful, especially in groups.  Women have work to do for our sisters and our daughters. … Young women have huge work to do–you have to get involved.