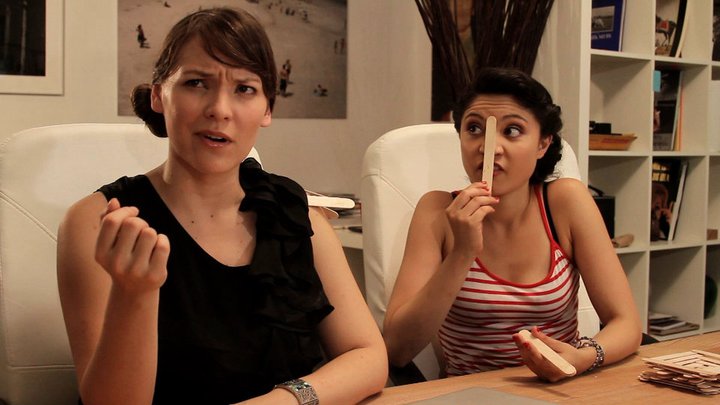 Recently, I had the opportunity to interview the creators of Vag Magazine, a comedy web TV show about a group of feminists starting an anti-patriarchal magazine. Leila Cohan-Miccio and Caitlin Tegart, the co-writers, co-creators and co-executive producers of the show, both hail from New York City’s Upright Citizens Brigade Theatre; after chatting with them, I realize it’s no wonder their brainchild is so funny and smart.

Ms. Blog: How did you come up with the idea for Vag Magazine?

Caitlin: I had been joking with friends about magazines you read and how they’d have recipes [for] vegan sweet potato fries. I had felt like this was an idea I should take and make more structured. I wanted a bigger project and Leila was on board with the idea.

Leila: I’d been obsessed with feminist magazines for awhile, we talked about it backstage, and I was super psyched to work with Caitlin on the project.

Ms. Blog: You’ve now put up five of a planned six episodes–what sort of responses have you gotten?

Ms. Blog: How did you get started doing comedy?

Caitlin: I’ve always loved comedy. I was always the funny person in class in school but I never thought about it as a career particularly. I’m from Indiana, and I didn’t know people from show business. It just wasn’t on the radar. Then I moved out here to New York and through a friend went to a UCB [Upright Citizens Brigade] show. I started taking classes four years ago, fell in love with it, and I’ve been doing this seriously for two and a half years now.

Leila For me it’s the same thing. I grew up loving comedy, loving to make people laugh, and I even wrote little sketches in middle school. But I never thought of it as something that people like me could do, and definitely didn’t think of it as a career option. I moved to New York and finally got up the courage and the money to take a class at UCB, and from then on I’ve been doing comedy.

Ms. Blog: Who are your comedy inspirations?

Caitlin: I’m such a huge fan of ’90s and ’80s sitcoms. I feel like coming out of that tradition, which is such a female-focused genre, from Roseanne to Golden Girls to Designing Women. I love ensemble character-based comedy. I’ve done sketch, but I’m not as much of a sketch nerd as other people in UCB.

Leila: I’m also a big ’90s sitcom fan, especially Roseanne. In terms of contemporary stuff, I like 30 Rock a lot and Arrested Development. I think my major inspiration comes from the larger world of observation, watching things that aren’t necessarily supposed to be comedy fodder.

Ms. Blog: When did you become feminists?

Caitlin: I’ve always been a feminist. My mom identified as feminist in the ’60s and had a women’s studies degree. She taught elementary school, and when Title IX passed became a volleyball coach.

Leila: Same for me. My parents were divorced, and I lived mostly with my mom (though I was close to my dad as well), and she was overwhelmingly a staunch feminist.

Leila: Feminism is a big part of our lives, and we were psyched to put this out there and send up this culture that we do enjoy very much as participants as well as observers. We would also like to make clear that we do think that Meghan–the “straight man” of the series–is also a feminist. Probably in her old office she was on the far end of the corner office where people thought she was weird for her feminist views.

The final episode of Vag Magazine goes online this coming Monday, Nov. 22: catch up on all the feminist fun at their website, vagmagazine.tv